No objects are safe in the pixel world of Riverbond. The environment surrounding you can be destroyed and explored at your own pace in this shoot and slash dungeon crawler.

A Shoot and Slash Dungeon Crawler 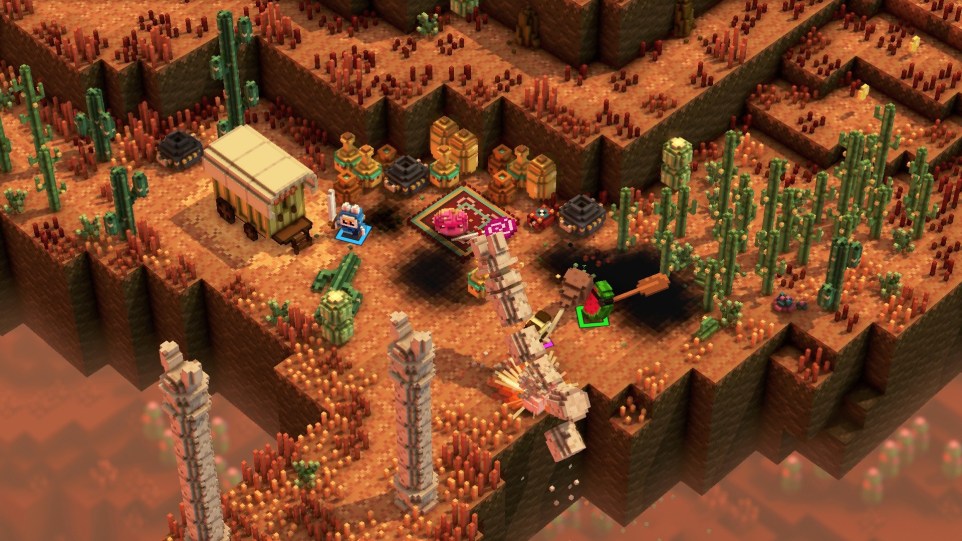 Riverbond is a shoot and slash dungeon crawler from Cococucumber that can be played alone or with up to four friends via couch co-op. Break apart enemies, objects, and even your environment in this pixilated world.

Fight back against an evil threatening the world by choosing a melee or ranged weapon that is suited for fast pace combat. No matter the situation, you’ll be well prepared for any enemy and bosses that stand in your way. Melee weapons choices include dual knives, a club, and even a book. The best ranged weapon is possibly the Bee Gun, where you shoot a swarm of bees at your enemies.

While the weapons of Riverbond are unique on their own, the world is completely destructible and explodes in glorious pixelated fun. Anything from bushes to giant pillars won’t be able to stand up to the swing of a mighty club or the blast of a gun.

Once a piece of the environment is destroyed, players are rewarded with coins or potions to help heal themselves after being surrounded by enemies or to help finish off a boss.

Once you’ve destroyed a piece of a larger object, you also have the option to pick it up and hurl it at your enemies. This allows for even more destruction and gives players another weapon to use.

Getting hands-on with Riverbond was a fun experience and it is definitely a game that one can get lost in with a lot of places to explore. Riverbond is out now for PlayStation 4, Xbox One, Steam, and will be released soon for the Nintendo Switch.

Be sure to check out even more of our coverage of PAX West 2019.