Frontier Development is taking what they’ve learned from Planet Coaster, Jurassic World Evolution, and Zoo Tycoon to create an all new theme park management simulation called Planet Zoo. Rather than constructing roller coasters, players are instead tasked with caring for wild animals while creating a park that is both entertaining and ethically sound.

As someone who grew up on Roller Coaster Tycoon and who has invested a decent amount of time into Planet Coaster, it’s no surprise that a new park management sim with fluffy zoo animals would spark my interest. I had a chance to try out Planet Zoo during its closed beta, which featured a thorough introduction to the game and its mechanics. In this tutorial section, a pair of zoo owners have hired you to work for their zoo and keep it in good condition. They each walk you through various aspects of zoo management, from building enclosures to caring for each animal. 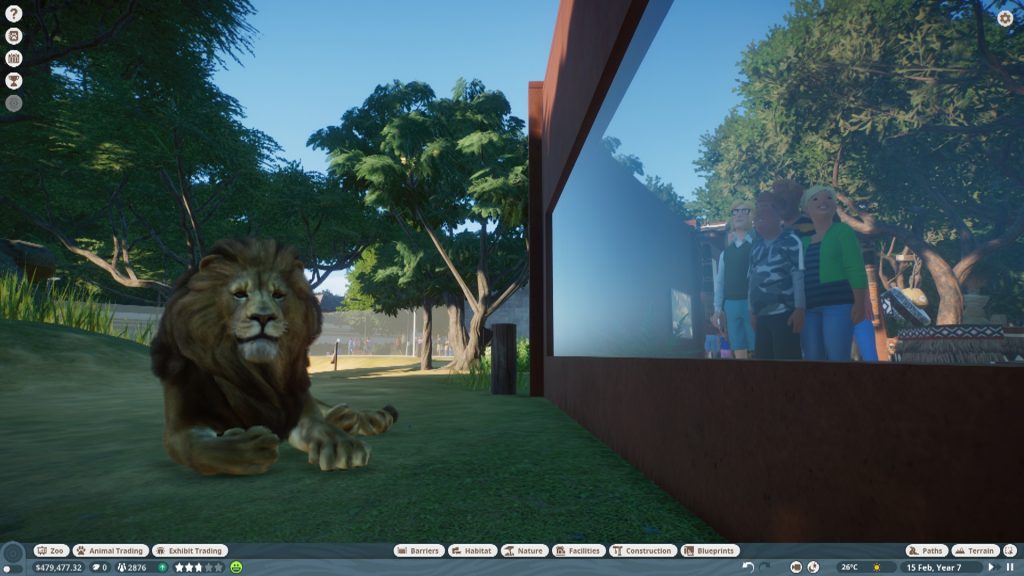 When creating or maintaining a zoo in Planet Zoo, the first priority is, of course, the animals. Caring for wild animals in a zoo involves so much more than keeping their food bowls stocked or throwing them the occasional toy. Each type of animal has a list of personal stats that reflect the animal’s overall disposition and welfare. 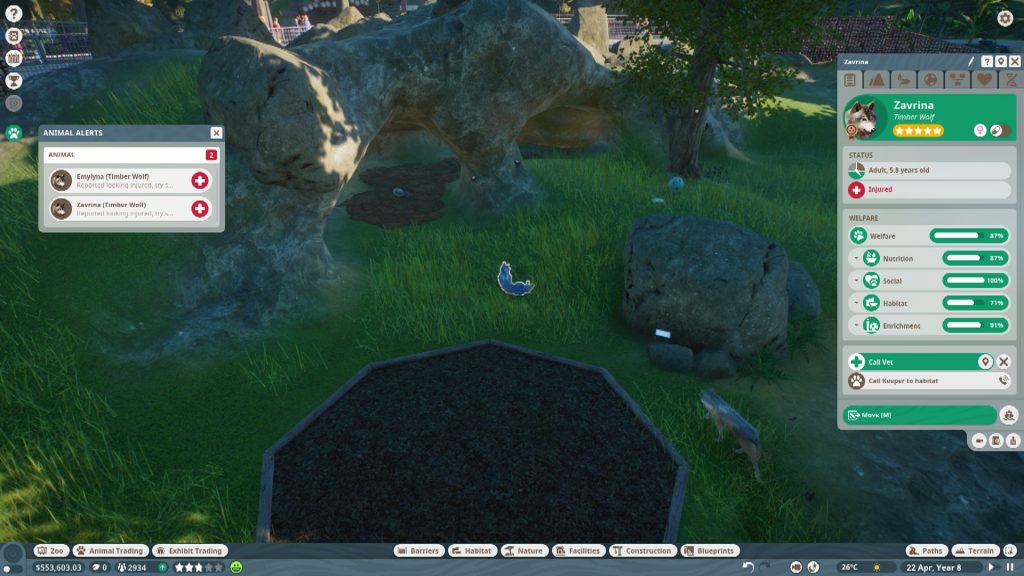 While providing food and clean drinking water are obvious for maintaining an animal’s nutrition, there are other factors to consider when judging an animal’s overall well-being, such as the surrounding foliage and terrain in an enclosure. It’s important to mimic the native environment of each animal species, and Planet Zoo gives you the tools to terraform an enclosure with the proper terrain, trees, and foliage density to appease whatever animal will live there.

Temperature is also important to consider when making a comfortable environment for animals, as some will need the dry heat of the Sahara desert, while others will require much colder conditions. The game provides a temperature overlay that is essentially a heat map for each enclosure, showing where the hottest and coldest parts of the enclosure are and where you should put temperature-regulating devices. 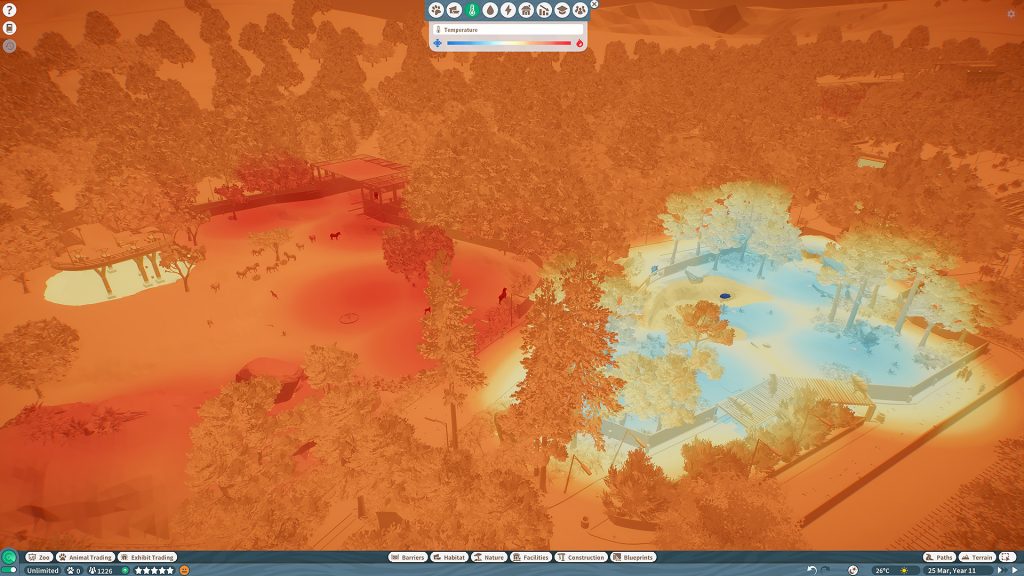 Social factors play a role in animal welfare as well. Some animals have social hierarchies that require a balance of male and female animals within the enclosure. However, depending on the species, you may need to expand the entire enclosure before adding new animals, as there are space limitations to consider as well.  An overcrowded enclosure can cause the animals stress, which can result in them having health issues.

Power to the People

Animal welfare is not the only thing you’ll need to manage in Planet Zoo. The thoughts and opinions of park guests are equally important for your zoo to thrive. Your zoo is a business, after all. When building enclosures for your zoo, you must take into consideration the experience of the visitors as well. Placing toys and other enrichment items near the glass window inside an exhibit offers patrons a front-row seat to some animal entertainment. Strategically-placed donation bins next to said windows can help boost your zoo’s revenue. Enclosure walls that are too short can allow climbing animals to escape and potentially cause chaos throughout the park. These are just a few of the details you must consider when building a successful park in Planet Zoo. 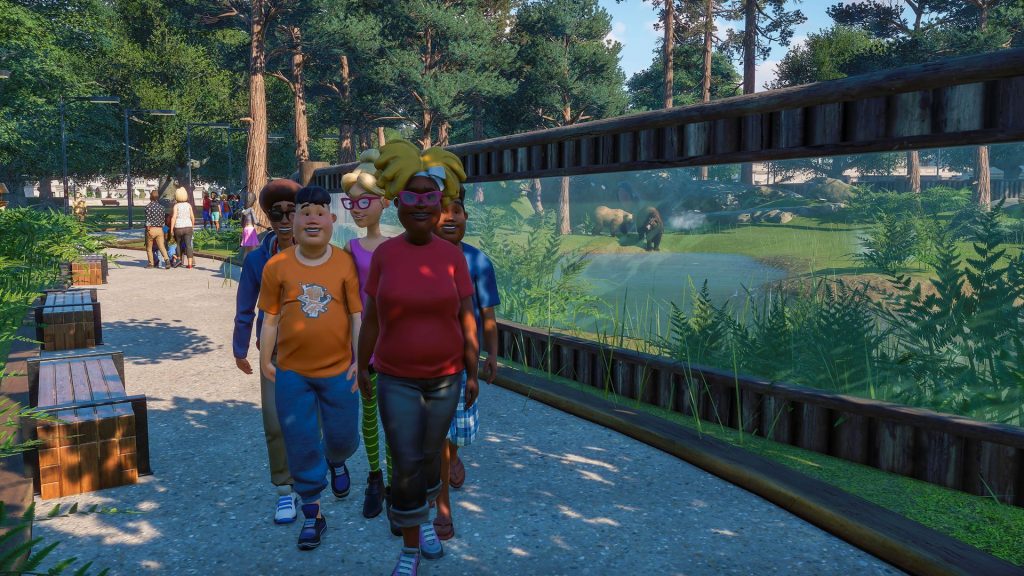 Park attendees are quite sensitive to animal well-being in Planet Zoo. I found this out the hard way during the beta. It turned out that I had the wrong type of water source in my ostrich enclosure, causing them to become severely dehydrated. It wasn’t long before a group of protesters gathered outside the exhibit to spread awareness about my blatant animal neglect. These sort of details not only serve to keep you on your toes, but they also add to the many layers of realism that Planet Zoo aims to achieve.

Planet Zoo does an excellent job of showing the complexities involved in caring for wild animals while emphasizing the importance of taking a conservationist approach to animal care. Planet Zoo adds even more depth to zoo management by allowing you to research different animal species and learn new ways to improve your park. There’s a lot to enjoy and discover in Planet Zoo, and I’m looking forward to donning my zookeeper hat and delving into what Frontier has in store. Planet Zoo opens its doors to the public on November 5, 2019 on Steam.