Typhoon Studios’ upcoming sci-fi adventure Journey to the Savage Planet is a quirky, colorful exploration game where players are sent to survey an uncharted planet on behalf of Kindred Aerospace, which considers itself the “4th best interstellar exploration company in the galaxy”. While the game’s adorable, bug-eyed aliens and satirical wit will capture your attention, it’s the stellar co-op gameplay that will make you stick around for more.

I had a chance to sit down for some hands-on time with Journey to the Savage Planet at PAX West 2019, where I was accompanied by one of the developers for a guided tour of Savage Planet’s co-op gameplay. The demo began with a brief introduction to the game’s platforming mechanics, which consisted of double-jumping, jetpack boosting, and some nifty grappling.

I fell into oblivion a couple of times when trying to clear some of the gaps, but this was more due to improperly timing my double jump. Once you get the hang of it, hopping between floating platforms becomes quite easy. Some platforms are accessible using a grappling tool, which lands you directly on the edge of the platform with very little risk of falling. The platforming was smooth overall and added a nice bit of variation to the game’s traversal. 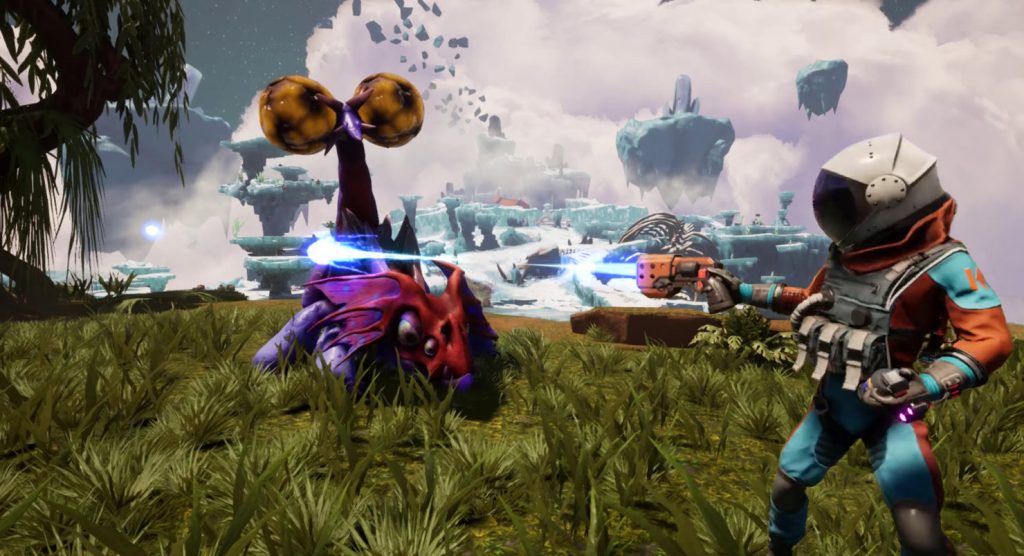 Your main goal in Journey to the Savage Planet is to explore a strange planet full of colorful space oddities. You can scan the planet’s various flora and fauna to glean new details about the environment. Since you start with limited resources, you’ll need to collect materials and blueprints to upgrade your equipment.

Resource gathering sometimes involves solving simple puzzles using items found in the environment. In the demo, the objects we were after were encrusted with amber, which can be melted with acid. Luckily, there were some acidic plants nearby, and lobbing one of their acid globs at the amber did the trick.

This was easier said than done, though. The acid globs only lasted a few seconds after being plucked from the plant, so we had to move fast if we wanted to chuck them at the amber in time. This task, combined with my mediocre platforming capabilities made the whole process a bit challenging. The more efficient solution was to take advantage of the acid-spitting, squid-like enemies hovering overhead by baiting their spit attack toward the amber. Problems like these can have more than one solution, so it’s worth paying attention to your surroundings for elegant ways to achieve different goals.

Asking for a Friend 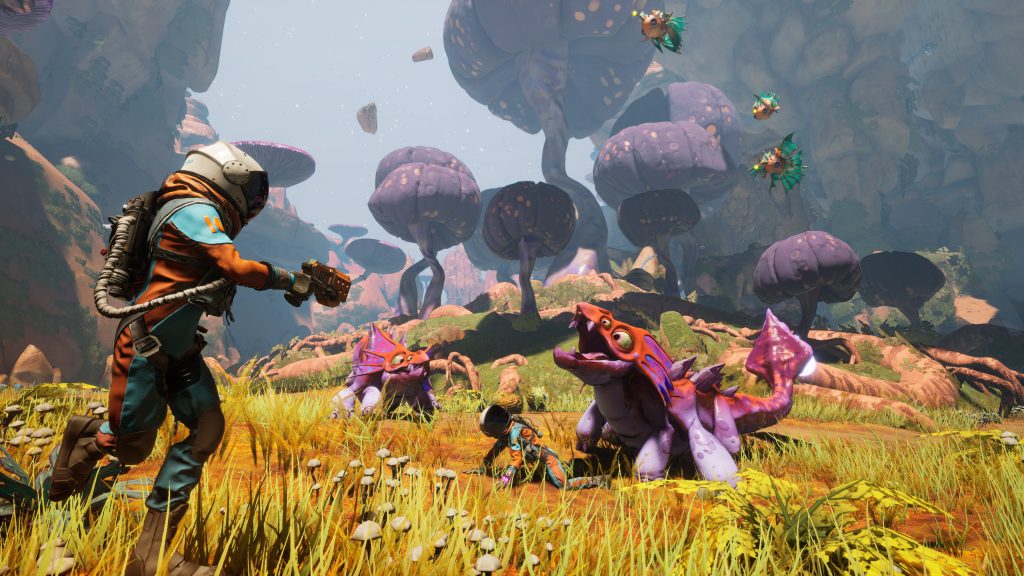 My main takeaway during my brief time with Journey to the Savage Planet is that it’s a game best experienced with a co-op companion. This isn’t a particularly novel concept; first-person space exploration games tend to lend themselves well to cooperative play, and it’s typically a feature that players want straight out of the gate (the uproar over the lack of co-op in No Man’s Sky at launch comes to mind).

While the game will likely provide a decent single-player experience, Journey to the Savage Planet seems like it is built for creating shared memories between two or more players. I would rather brave the wacky world alongside a friend and endure what the planet (literally) throws at us than chuckle to myself at the goofy television ads in my spaceship alone. Regardless, Journey to the Savage Planet is shaping up to be a promising sci-fi excursion, and I’ll be sure to sharpen my platforming skills in time for the game’s launch on January 28, 2020.

Journey to the Savage Planet Touches Down in January 2020

Colorful Exploration at Its Funnest – Journey to the Savage Planet Review

Planet Zoo Preview – Into the Wild