From tabletop to mobile, North Star Digital Studios is taking the next step in bringing a classic board game to the screen at home. With hands-on at PAX West 2019, Guide Stash learned that Evolution is coming to the Nintendo Switch.

I will admit that I don’t get to play board games as much as I want to these days. Luckily, tabletop games are coming out with digital versions that can be played on mobile devices and consoles, bridging that gap for folks like me. North Star Digital Studios is doing just that with its card-based strategy game Evolution.

In Evolution players must adapt their species in order to survive. Gameplay takes place at a watering hole where players feed on plants and try to stay one step ahead of the competition. Players must evolve and gain new skills to take in more food and to keep predators from making them extinct. They can choose to evolve into a predator themselves once they’re given the right card, or to stay as they are. The player left alive with the most resources at the end is the winner.

Evolution has a 24-level campaign, multiplayer, and is cross-platform with Android, iOS, and Steam, so you’ve always got someone to play against. You can even sync your stats across any platform so you’re not tied to one or the other. 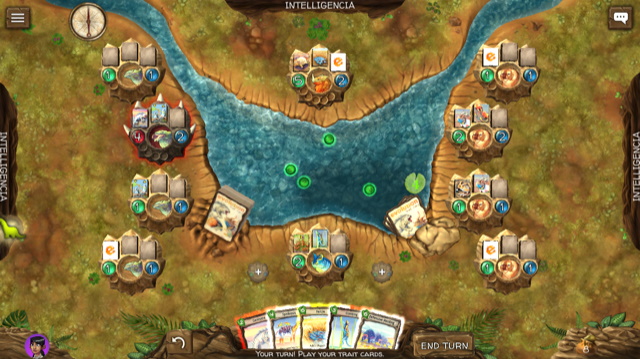 I had never heard of Evolution before PAX West 2019 and was excited to get my hands on it. Bree was my guide to all things Evolution and helped me get going. The controls for Evolution are very simple, as every action is assigned to a button on the Nintendo Switch controller and is displayed on the screen as well.

I was surprised at how quickly the game went when it was the AI’s turn. Some games allow you to adjust the speed of the AI, but North Star Digital Studios put that as a regular feature to decrease the game length. Evolution also features pass and play with up to four people in handheld mode. Once someone is done with their turn, simply hand the Switch off to the next player.

The biggest thing that stood out to me was the art behind Evolution. The bright colors and the way the animals were drawn really stood out as unique and was presented with an impressive level of polish. It was as if these creatures had been discovered for the first time and were being drawn into an explorer’s field book. There are a lot of cheap looking mobile experiences floating around out there these days, but Evolution is not one of them.

Evolution is slated to come out on Nintendo Switch next year and will feature cross-play with Android, iOS, and Steam. Once we get a Switch release date, we’ll be sure to address it with our daily video game news coverage.