I have a particular fondness for puzzle games, particularly ones that involve manipulating the environment. When I had heard that Pathea Games, the developers behind My Time at Portia, had a new puzzle game in the works, I knew I had to check it out. The game is called Ever Forward, and a free playable demo is now available on Steam and Itch.io. Continue reading to find out what we thought of the demo!

Ever Forward is an adventure puzzle game that takes place in a dreamlike world where the lines between reality and imagination are blurred. You take on the role of a young girl named Maya. The demo opens with your abrupt arrival on the shore of a beautiful island. Its vivid color palette is reminiscent of the islands found in RiME or The Witness. Unlike those games, however, most of the puzzles in Ever Foward are not solved upon the island itself. You must venture to another realm to find and solve the puzzles instead. 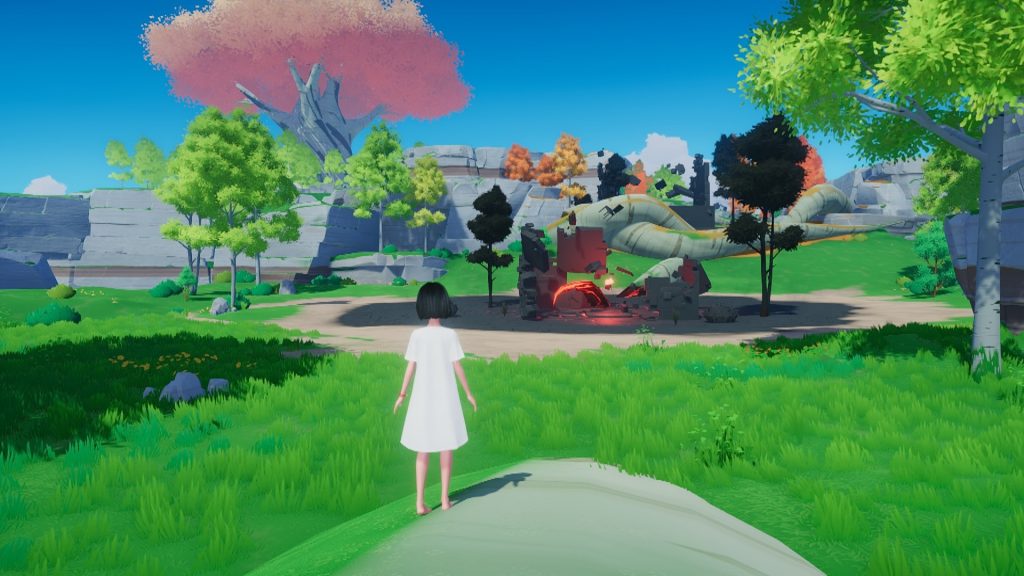 As you explore the island, you’ll come across dark, ominous plots of land that serve as portals to an alternate dimension composed of geometric platforms and a more blocky, muted aesthetic. It is in this dimension that you will solve various environmental puzzles.

Each puzzle in Ever Forward seems to be tied to Maya’s subconscious, as solving a puzzle will reveal a portion of one of Maya’s fragmented memories. The memories allude to an event in Maya’s past that she had all but forgotten. The more puzzles you solve, the more you can learn about Maya through her memories. 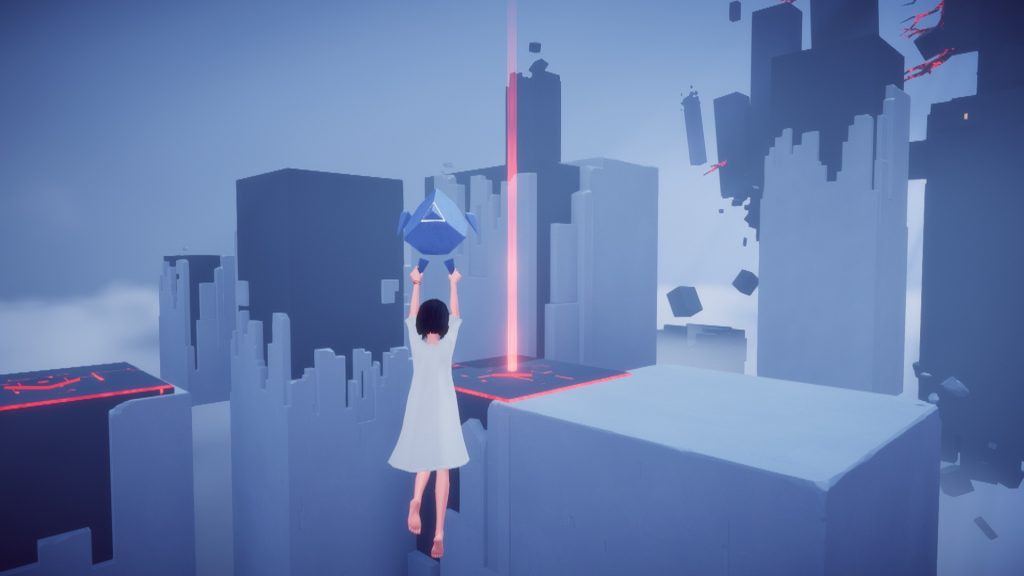 Along the way, you are accompanied by a floating robotic companion. The robot doesn’t do much while on the island other than follow you around, at least not in the demo. However, when Maya is in an alternate puzzle dimension, she can call upon her robot and use it to float to nearby platforms and activate each puzzle. 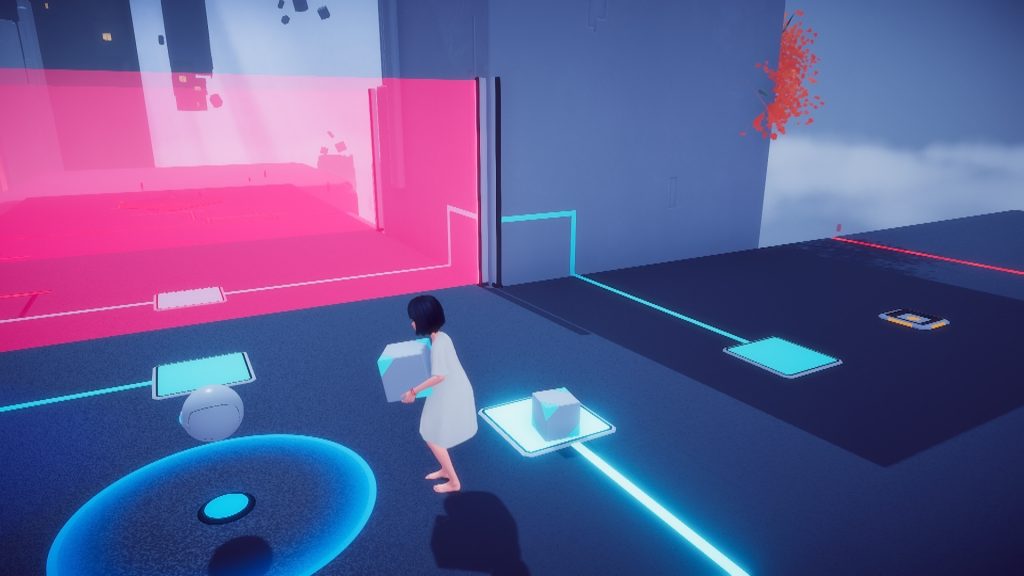 The puzzles involve manipulating switches and sneaking past armed robots to reach what is effectively a finish line at the end of a path. Maya can only perform simple tasks such as lifting blocks and climbing ledges, and it’s up to the player to figure out how to maneuver her past the robots without getting shot. Though the puzzles are mechanically simple, that doesn’t mean they are necessarily easy to solve. Even though the demo is brief, there were a few puzzles that had me scratching my head. I imagine the full game will feature much more challenging puzzles.

After solving a puzzle, one of Maya’s memories will be revealed as a brief cutscene. Upon completing all of the puzzles within a single region, the ominous portal that you entered from will fade away from the island. 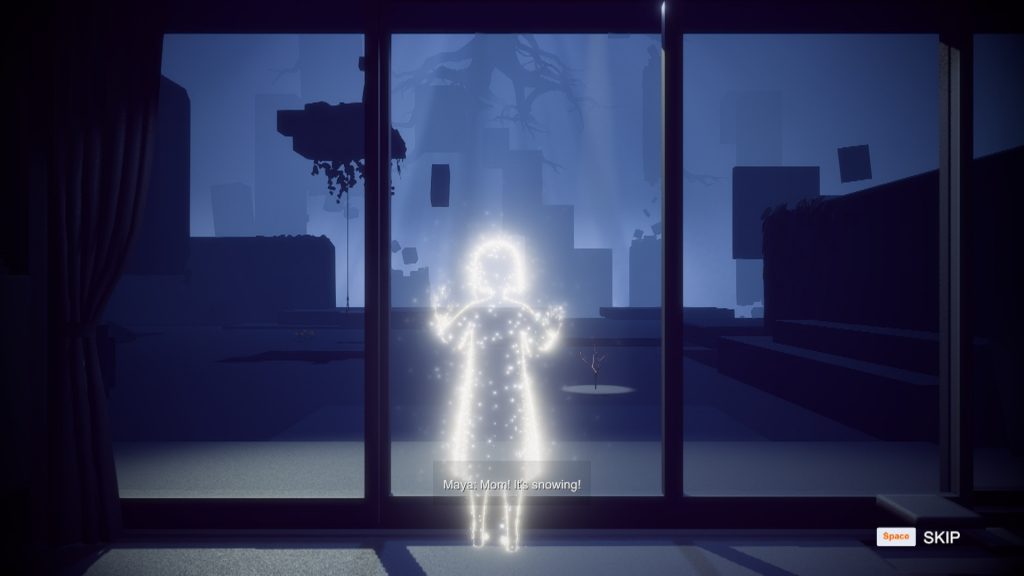 While I can appreciate what the developers are trying to do with the interplay between reality and imagination, I am hoping that there’s a clearer connection between the island and the puzzle dimensions in the final game. Though the island itself is a lovely place to explore, it would be nice if there were more things to do on the island than just walk from portal to portal.

The story elements shown in the demo were intriguing enough to spark my interest and has left me wanting to learn more about Maya’s past. Though I enjoyed the puzzles, I was left wanting more. However, the demo only features 40% of the full game, so there’s still plenty to look forward to once the game is released. It’s also worth noting that progress made during the demo will carry over to the final game. Ever Forward is a charming puzzle game that has a lot of potential, and I look forward to diving into the full game when it arrives in July 2020.

Head over to the Ever Forward Steam page or Itch.io page for additional information, news, and updates. Also, be sure to check out the trailer for the demo below.

Land of the Vikings Launches Into Early Access in November