After EA quietly rolled out invites for their next Plants vs. Zombies shooter, codename Picnic, fans of the zany series have been on high alert for the game’s inevitable announcement. Although no official reveal has been made, rumor has it that the next game in the series is called Plants vs. Zombies Battle for Neighborville.

The title comes from a recently leaked screenshot that made its way onto Reddit. The screenshot depicts the title text on a dark background, along with a short description of the game. Here’s what it says: 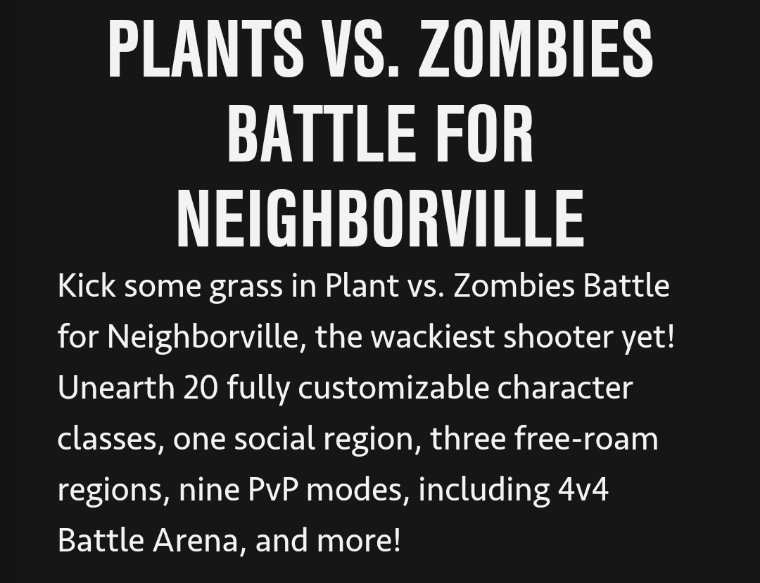 The screenshot reportedly comes from a link on the EA website that leads to the Plants vs. Zombies Battle for Neighborville page. However, the information on the link has since been removed and replaced with the text “nothing to see here” alongside an image of a suspicious Tallnut. What’s interesting is the fact that EA didn’t bother to delete the actual URL, they simply changed what was displayed on the page. Perhaps we can expect the page to update once again after the Picnic playtest is over.

This is all speculation, of course, so take it with a grain of salt. We’ll be keeping an eye out for any further details regarding the next Plants vs. Zombies game, so be sure to check back here for updates.

EA Sends Out Invites to New Plants vs Zombies Alpha

PvZ: Garden Warfare 2 Rolls Out Tale of the Taco Update