By Larryn Bell on Jan 8, 2020 at 5:29 pm. Filed in News under Plants vs. Zombies: Battle for Neighborville.
Share Tweet Save to Stash Google+ Email WhatsApp

Dust off your sled and warm up some cocoa for this month’s festival in Plants vs. Zombies: Battle for Neighborville.

Feastivus may be over, but that doesn’t mean the festivities have to end in Plants vs. Zombies Battle for Neighborville. The Snow Day festival has officially begun, bringing with it a brand new prize map and new in-game cosmetic items to both plants and zombies alike.

The prize map for the Snow Day event in Battle for Neighborville features an assortment of cosmetic items, gestures, slabs, and emotes for players to earn. Prizes are unlocked using Prize Bulbs, which are accumulated by earning XP as you play. The Snow Day prize map also contains several opportunities for free Rainbow Stars, which players can use to purchase items from Rux’s Emporium in Giddy Park. 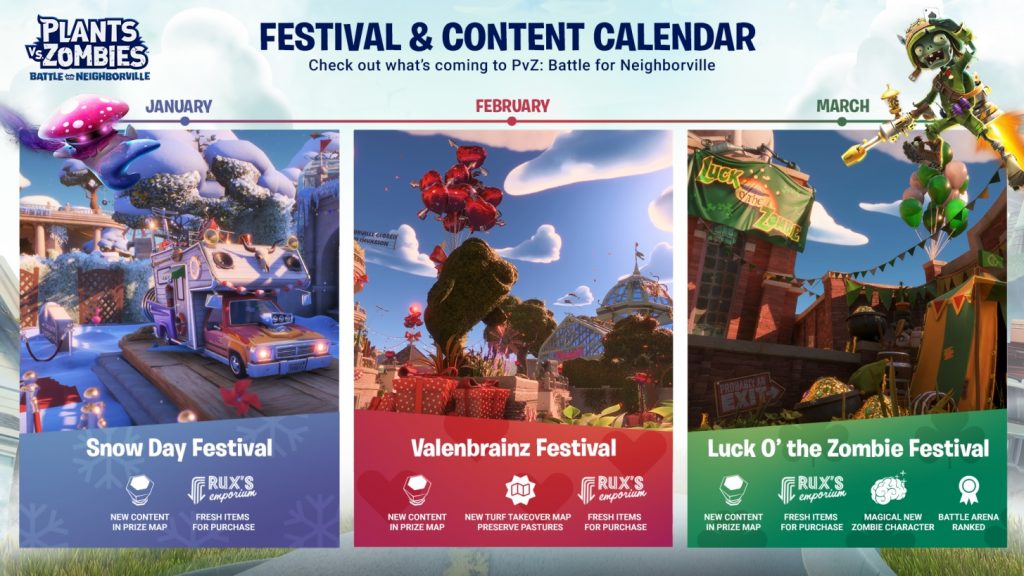 The developers at PopCap have also given players a sneak peek at what’s to come in the months ahead regarding festivals. For February, players can look forward to the Valenbrainz Festival, which also introduces a new Turf Takeover map. If you’ve been itching for a new character, then you’ll have to wait until March, when the Luck O’ the Zombie festival begins. This is when a “magical new zombie character” is said to debut in Battle for Neighborville, alongside a ranked version of Battle Arena.

Be sure to check back here for more Plants vs. Zombies Battle for Neighborville news. We also have several guides to help you discover secrets in the game, such as how to solve the secret gnome puzzle in Giddy Park.