By Larryn Bell on Sep 4, 2019 at 12:12 pm. Filed in News under Plants vs. Zombies: Battle for Neighborville.
Share Tweet Save to Stash Google+ Email WhatsApp

Like its predecessors, Plants vs. Zombies Battle for Neighborville is a wacky third-person shooter that pits sentient plants against reanimated zombies for a zany battle you won’t soon forget. The game features online multiplayer for up to 24 players as well as a free-roam PvE area set in various parts of Neighborville. The game also includes six new character classes, three plants and three zombies.

Fans of the series have been anticipating the news for a while now, especially after EA hosted a closed alpha playtest for the game not too long ago. The game was revealed today through a brief gameplay trailer with some developer commentary explaining what’s in store. The reveal also came with a surprise–the game is available to play right now.

The Plants vs. Zombies Battle for Neighborville Founder’s Edition is available for digital purchase on Xbox One, PlayStation 4, and PC for $29.99. The Founder’s Edition offers exclusive rewards and access for players who want to dive into the game early before its full launch in October. Founders get to play through six weeks of content as new parts of the game gradually go live. Check out the Founder’s Edition calendar below for what to expect in the weeks ahead. 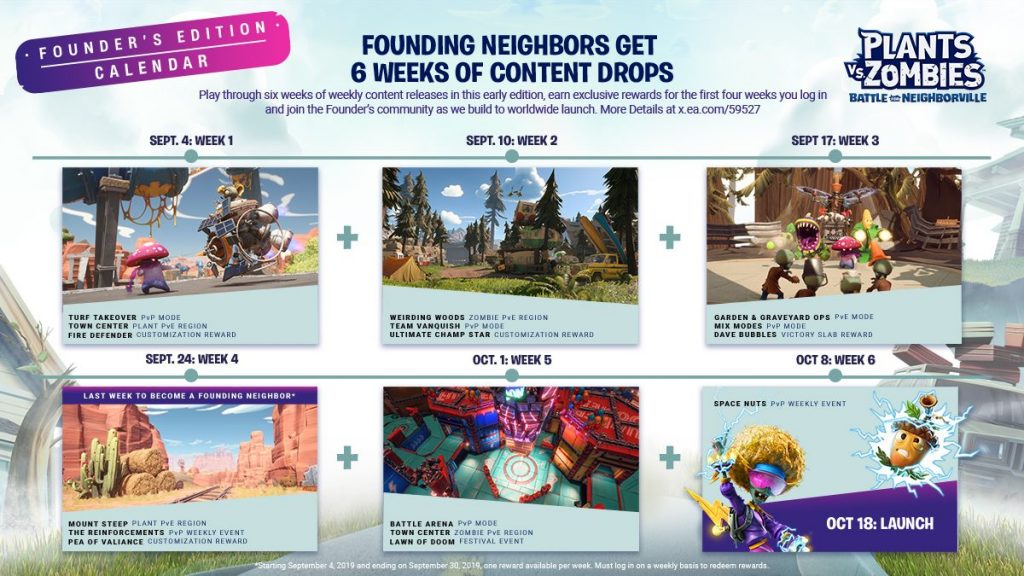 “Keep in mind, PvZ: Battle for Neighborville’s modes and features are already final,” says the developers. “By giving our biggest fans a chance to come in now, we’ll be polishing performance as you play to ensure our scaled experience is running at peak levels for launch and beyond, making the PvZ: Battle for Neighborville experience the best it can be.”

Plants vs. Zombies Battle for Neighborville will fully launch on October 18, 2019 for PlayStation 4, Xbox One, and PC. The price will also increase to $39.99 for those who chose not to purchase the Founder’s Edition.