If you’re looking for a game that has done post-launch support right, look no further than Monster Hunter: World. In addition to a non-stop rotation of quests and events, Capcom has done a great job of thanking its players for their continued support. That trend will continue with the Monster Hunter: World 13 Million Celebration Item Pack, a reward for anyone who logs into the game between July 25 and August 29. Among the notable items is an Attack Jewel, one of the most highly sought items in the game. 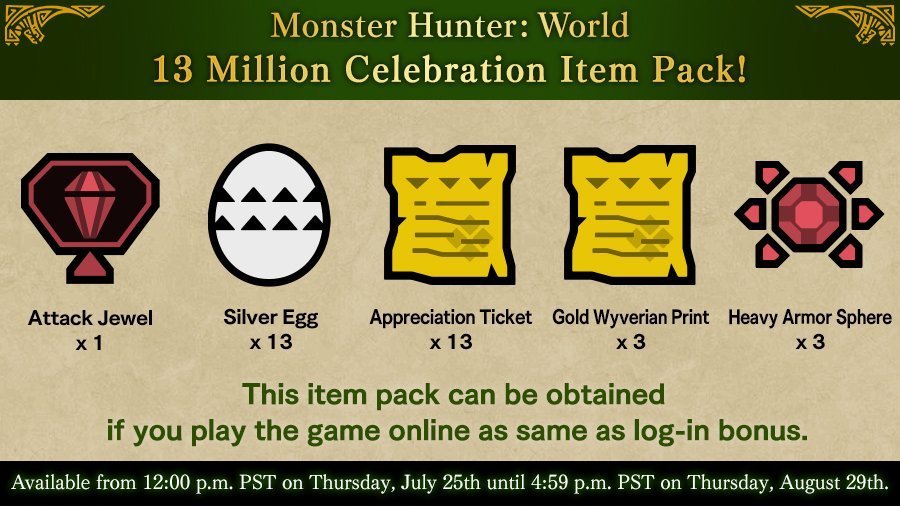 The 13 Million Celebration Item Pack contains the following according to the Monster Hunter: World website:

That is a massive haul for simply logging in, and especially since Attack Jewels are so valuable and rare. To be handed one just for logging in is like being given $1,000 just for waking up in the morning. You didn’t earn it and it probably won’t ever happen again, but it’s awesome.

Any players thinking about jumping back into Monster Hunter: World for the Iceborne console release on September 6 should snatch up the 13 Million Celebration Item Pack. PC players should, too, but they must wait until the winter to get their hands on Iceborne. Still, this collection of resources is too good to pass up if you plan to visit Monster Hunter: World any time in the future.

Overwatch 2 Players Will Get a Free Legendary Skin in October

Play The Icon Mission for Free in Hitman 3