Microsoft Flight Simulator has been setting new records since its debut in August 2020. On Thursday, a report from Xbox Wire revealed that the latest iteration has become the fastest growing entry in the series, with over two million virtual pilots taking flight since launch.

While this is a praiseworthy achievement for Microsoft’s longest-running franchise, this is not the only milestone Microsoft Flight Simulator has reached since its release this year. The game also holds the title of the “biggest game launch in Xbox Game Pass for PC history,” according to the report. 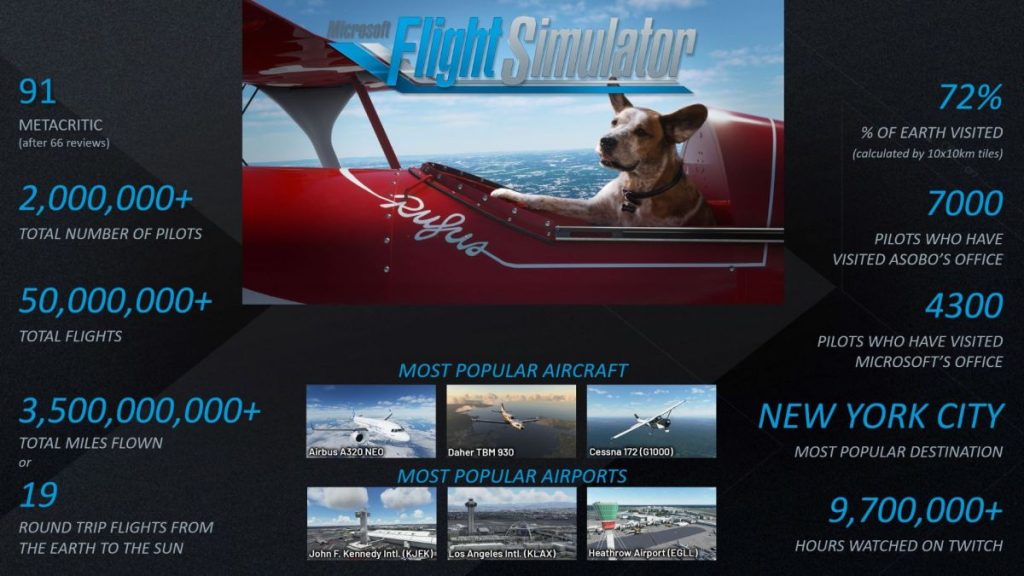 The Xbox Wire report, written by Head of Microsoft Flight Simulator Jorg Neumann, continues with an infographic featuring other interesting statistics. The game’s pilots have embarked on more than 50 million flights, with over 3.5 billion miles flown to date. “It’s been humbling to see the positive reactions to Microsoft Flight Simulator and we feel incredibly fortunate and blessed to have such a highly engaged community that continually helps us improve the simulation with their ongoing and insightful feedback,” said Neumann.

Console players can look forward to getting their hands on Microsoft Flight Simulator next year. The game is set to take flight in Summer 2021. A recent trailer (included below) shows the game running in real time on the Xbox Series X, giving console players a glimpse of what to expect in roughly half a year from now.

Those looking to experience the game in VR need only wait a few more days, as the VR update arrives on December 22, 2020. The update will add real-time snow and ice coverage across the planet, making for an even more immersive flying experience.