Today, Crystal Dynamics and Square Enix revealed more info about their upcoming game, Marvel’s Avengers, during Square Enix’s Marvel’s Avengers War Table digital stream. The showcase featured new footage of a hero-specific campaign mission for Thor. Special hero customizations and co-op abilities were also highlighted. Perhaps the biggest takeaway from the digital stream was the appearance of the game’s primary villain, MODOK (Mental Organism Designed Only for Killing). You can check out the full Marvel’s Avengers War Table stream in the video below.

The stream gave us a first look at part of Thor’s “Once and Avenger” campaign hero mission. In it, Thor dons the look of his alter-ego, Donald Blake, who first appeared in 1962’s Journey into Mystery issue 83. Teaming up with a slew of familiar heroes including Ms. Marvel, Black Widow, Hulk, and others, Thor shows off his mastery of both lightning and his hammer, Mjolnir.

The Marvel’s Avengers War Table stream revealed additional game modes in Marvel’s Avengers. Among them is a new team-based mode called War Zones, which can be played solo or cooperatively with up to four players. Similar to raids in Destiny, you can replay these missions over and over again with your friends, all while developing and improving your hero’s gear and abilities in a mission difficulty system that scales to your level. The idea is to familiarize yourself with and ultimately master your customizable preferred hero. Are you playing as Iron Man? Take Tony’s suit for a joyride and marvel (pun very much intended) at your customized handiwork during the missions. You can even try out the game’s set of fan-favorite costumes, including Tony Stark’s Hulkbuster. That’s what the War Zones game mode is all about. 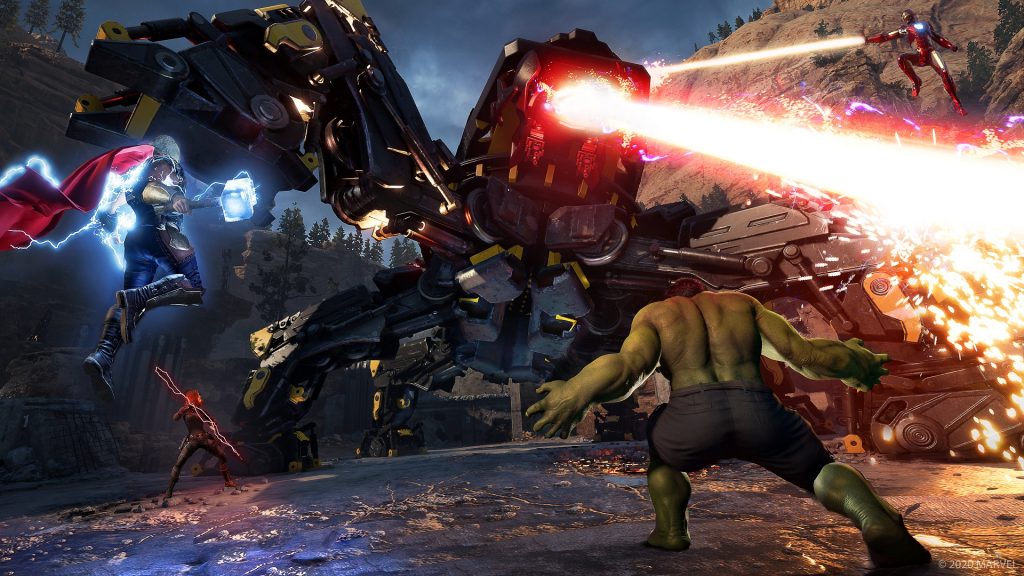 With so much customization and a robust progression system, questions about affordability and content are to be expected. According to Crystal Dynamics, the narrative from the campaign will continue to expand, new stories will be told, and new gameplay opportunities will be granted to all those who buy the core game. There is no planned additional cost after a one-time purchase of Marvel’s Avengers.

Marvel’s Avengers will release for PlayStation 4, Xbox One, Stadia, and PC on September 4, 2020. Marvel’s Avengers will also release on PlayStation 5 and Xbox Series X during the 2020 holiday season. Players who own the current-gen version of the game will be able to upgrade to the next-gen version for free. This applies to users on both consoles.