Nintendo gave Luigi fans a glimpse of Luigi’s Mansion 3 on Tuesday during their Nintendo Direct presentation for E3 2019. The Luigi’s Mansion 3 E3 trailer gave a closer look at the game’s premise, gameplay, and new features.

Despite the name, Luigi’s Mansion 3 actually takes place within a haunted hotel. Luigi is invited to stay at a luxurious hotel alongside Mario, Peach, and several Toads. When things take a spooky turn, it’s up to Luigi to reluctantly search each floor of the hotel to retrieve his friends before it’s too late.

Luigi has several tools at his disposal for vanquishing ghastly ghouls. Luigi comes equipped with the Poltergust G-00, an upgraded version of Luigi’s ghost-sucking vacuum from the previous games. The Poltergust now features several new functions to help Luigi deal with ghosts, including a slam attack, an air pressure burst, and a suction shot. 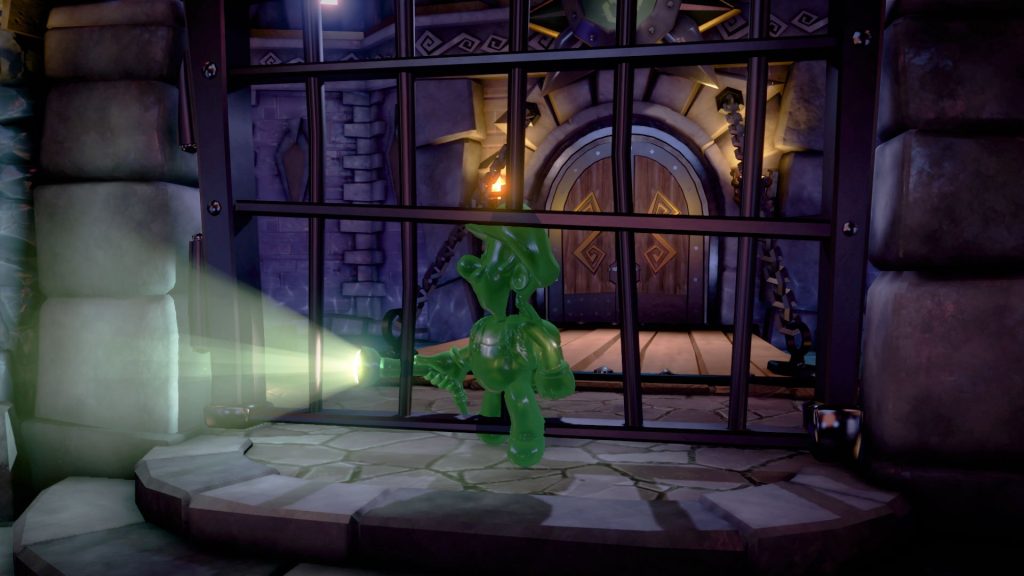 Gooigi can walk through metal bars and spikes to reach areas Luigi can’t.

Luigi also doesn’t have to brave the adventure alone. Thanks to Professor E. Gadd, Luigi can now summon a green clone of himself made of goo, aptly named Gooigi. Gooigi can walk through objects to perform tasks that regular Luigi can’t. Players can swap back and forth between Luigi and his gooey companion to solve puzzles in unique ways. Keep in mind, however, that water and Gooigi don’t mix. Rather, they mix a little too well, as we see in the gameplay trailer.

Nintendo also revealed a new co-op mode for Luigi’s Mansion 3 called ScareScraper mode. In ScareScraper mode, players must work together to suck up ghosts and complete challenges to clear out as many floors as possible before the timer runs out. This mode supports local and online co-op play for up to eight players.

The gameplay trailer shown during the Nintendo Direct E3 2019 presentation shows off a little bit of everything. However, if you want to see a more in-depth look at gameplay for Luigi’s Mansion 3, you can watch additional gameplay from the Nintendo Treehouse livestream as well, which we’ve linked at the bottom of this article.

Luigi’s Mansion 3 does not have a specific release date yet, though the trailer says it will be available in 2019 for Nintendo Switch.