Although Hitman 3 marks the end of the World of Assassination trilogy, there’s plenty of post-launch content still to come. The developers at IO Interactive have released the February Roadmap for Hitman 3, revealing new Contracts and Escalations for players to enjoy throughout the month. You can have a look at the upcoming content in the developer’s February Roadmap overview video.

According to the roadmap, new content will be dropping each week throughout the month of February. The first dose of content this month is the Baskerville Barney Escalation, which is available as of today, February 4. In this Escalation, your objective is to kill the Carlisle family using accidents only. 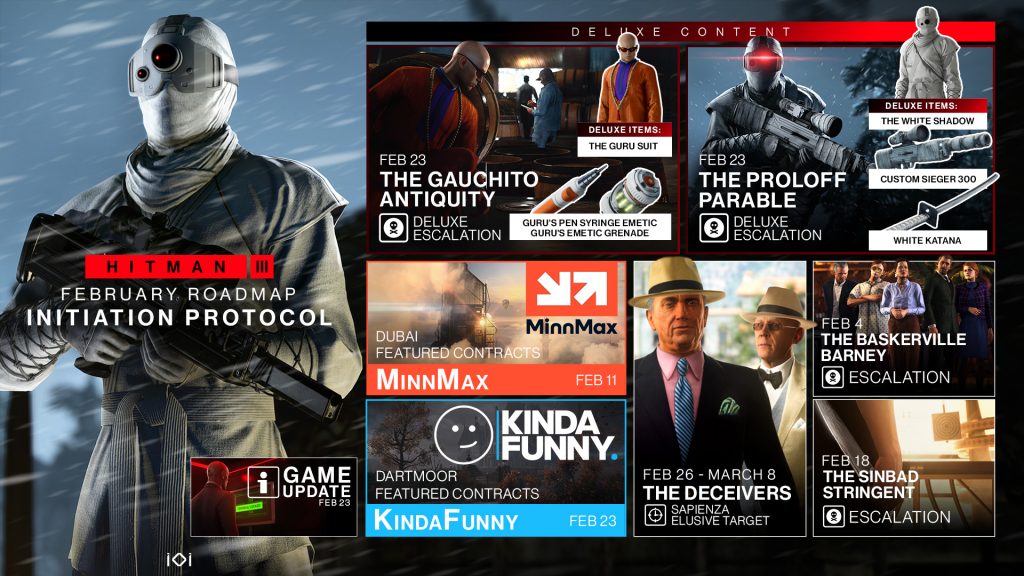 The following week on February 18, the Sinbad Stringent Escalation becomes available. All we know about this Escalation is that it involves throwing knives at boxes, so make of that what you will.

Owners of the Hitman 3 Deluxe Edition get to enjoy two new Deluxe Escalations this month. First up is The Proloff Parable, where players will don the ninja outfit of the White Shadow. While aboard a train in the Carpathian Mountains, players must use both the white katana and white Sieger 300 sniper rifle to quickly drop targets while on the move. In the Gauchito Antiquity Deluxe Escalation, players will instead take on the role of The Guru, who uses emetic poison to eliminate targets while they are intoxicated. Both Deluxe Escalations will be available on February 23, alongside a Hitman 3 game update.

Finally, the February content drop wouldn’t be complete without an Elusive Target (or two) to take down. From February 26 through March 8, players can begin their hunt for The Deceivers in Sapienza. Your goal is to eliminate two targets in this mission, so best come prepared with a plan.

Be sure to stay tuned to Guide Stash for more Hitman 3 news and updates!

Hitman 3 Debuts on Steam With VR Support for Year 2