IO Interactive recently revealed the Hitman 2 July roadmap for 2019, and it’s full of goodies that gamers can sink their teeth into as the summer rolls on. The main highlight of the month will almost certainly be the addition of The Prison, the new Sniper Assassin map that will arrive on July 30. Beyond that, though, July is sprinkled with oodles of other fun assassination activities that will unlock new suits and gadgets for Agent 47 to do what he does best. 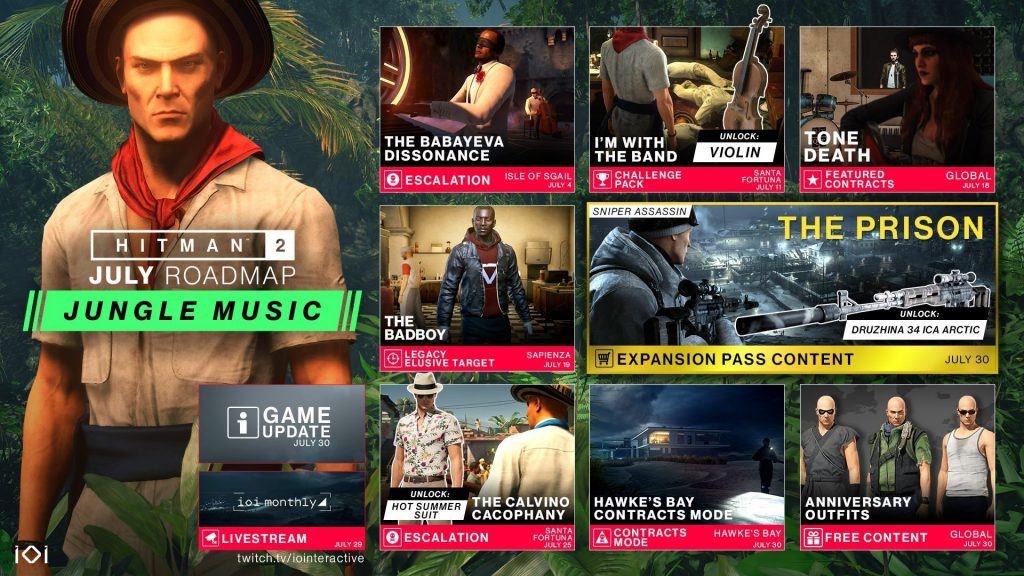 There’s a lot packed into the Hitman 2 July roadmap for 2019, and we’ve included it all in a chronological list for you to browse through at your convenience:

Knowing Hitman 2 players the way I do, the standouts are most certainly The Prison being added as the new Sniper Assassin map. Beyond that, the I’m with the Band Challenge Pack will unlock the Violin as an item of destruction for Agent 47 to take with him on future missions. The Badboy being the Elusive Target in Sapienza on July 19 will be cool for those seeking suit unlocks. Speaking of suits, players can also get the Hot Summer Suit in The Calvino Cacophany Escalation Contract, or a batch of Anniversary Outfits in a free content pack on July 30. Read the full IO Interactive post on their website.

As is the case with Hitman 2 every month, IO Interactive is doing a fantastic job of supporting the game as it ages beautifully. The Hitman 2 July roadmap is a perfect example of this. Players thinking about digging in should do so before July 9, as Hitman 2 is deeply discounted on steam right now. If you already own the game, be sure to stay current on all our Hitman 2 coverage.