It seems whenever I write about Hitman 2, I can’t help but mention how incredible the post-launch support has been from IO Interactive. Every month, the studio rolls out loads of new content that drops each week, giving players something to chase almost every time they log into the game. Keeping that ball rolling, IO Interactive today announced its December 2019 roadmap, which includes new unlocks and the Holiday Hoarders event.

There aren’t a lot of things listed on the December 2019 roadmap for players to unlock this month in Hitman 2, but they are notable. Beginning on December 17, players can take part in the Snow Festival in Hokkaido to get their hands on the Ice Pick and Snow Festival Suit. They can also return to Paris for the Holiday Hoarders event, which unlocks the very popular Santa Suit. In Hitman 2, unlock new suits to dress Agent 47 in is all the rage. 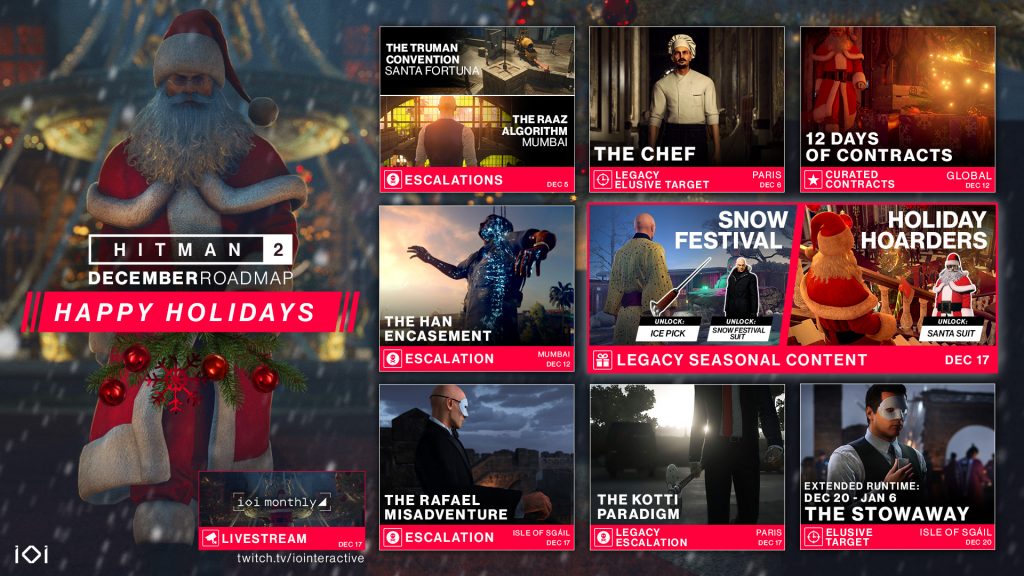 December 2019 will also feature an event called 12 Days of Contracts in Hitman 2. These will be curated contracts running every day up to December 24. There’s no word on the rewards for completing this as per the roadmap, but one would think something should be available.

All of this is in addition to other in-game events through December 2019. Expect more escalation contracts and elusive targets. The latter can lead to unique suit unlocks depending on how many you’ve completed and in which locations, so don’t sleep on those.

To stay current with all things Hitman 2, be sure to keep it locked on Guide Stash. Dating back to Hitman 2016, IO Interactive has created one of the most fun worlds to be a part of and supported it with loads of free content to dive into. There will be lots of additional news in the future, and we’ll be on top of it.