This year’s Fortnite World Cup championship tournament wrapped up in New York this past weekend, with the first ever Solo player taking home the grand prize. The title of grand champion goes to 16-year-old Fortnite player Kyle ‘Bugha’ Giersdorf of the United States. A member of the Sentinels esports organization, Giersdorf took home a whopping $3 million grand prize for defeating his 99 other Solo competitors. According to CNN, it’s the largest prize for an individual player at any esports tournament. In fact, Giersdorf took home a bigger cash prize than either of this year’s Wimbledon and PGA champions as well.

Congrats to all of our winners this weekend at the #FortniteWorldCup!

The Fortnite World Cup tournament uses a points system to determine player standings across each match. During the finals, Giersdorf started out strong by securing nine eliminations and the Victory Royale in his first match. By the end of the tournament, Giersdorf had accumulated a total of 59 points, surpassing his opponents and nearly doubling the points of the second-place player. There was no question during the final calculations that Giersdorf was the clear winner.

“Words can’t even explain it right now. I’m just so happy,” said Giersdorf after earning his trophy. “Everything I’ve done, the grind, has all paid off and it’s just insane.”

Although the remaining finalists who placed among the top ten didn’t take home $3 million like Giersdorf, they did receive their own cash rewards, each earning no less than $225,000. The second, third, and fourth place competitors were rewarded with over $1 million apiece. Below are the final standings from the 2019 Fortnite World Cup tournament. 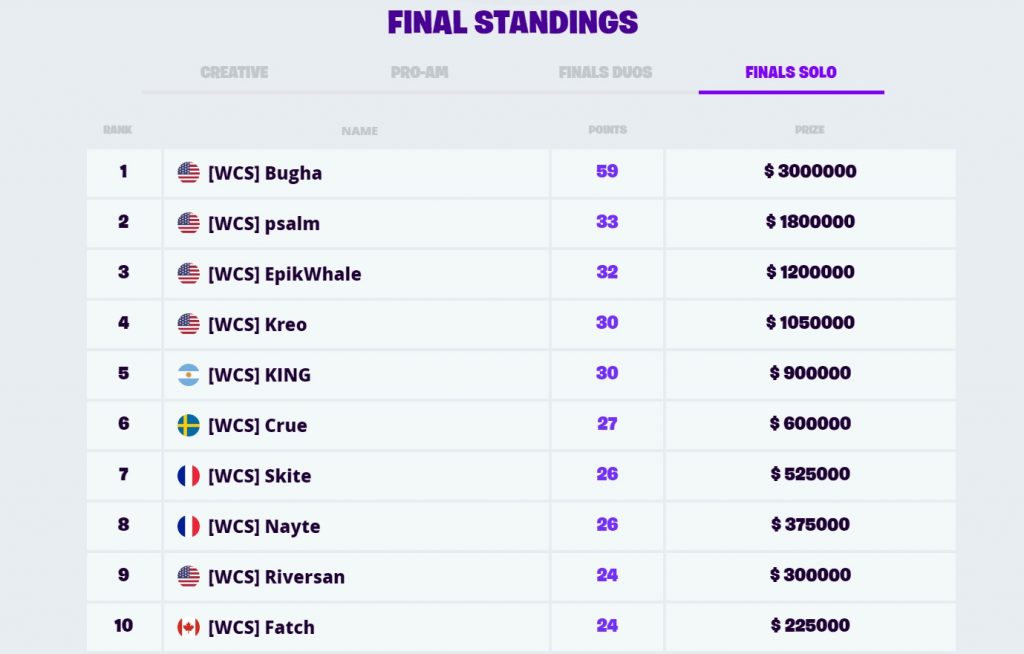 Fortnite is entering its 10th season this week, with teasers that allude to the map reverting to the past. Stay tuned for more Fornite updates!