The highly anticipated PC Alpha public test for Elite Dangerous: Odyssey is now underway, according to an announcement today from developer Frontier. Those who pre-ordered the Deluxe Alpha Edition or who own the Lifetime Expansion Pass can now download and participate in the public alpha test on PC.

The Elite Dangerous: Odyssey PC Alpha consists of four phases, with the first phase running for several weeks. Each phase aims to gradually introduce new gameplay features to alpha testers. Alpha Phase 1 focuses primarily on the game’s core systems and networking. Since the PC Alpha marks the first time players can walk on the ground in Elite Dangerous, it is important to solidify the basics.

Commanders are grouped into a single star system, Adityan, to maximize player interaction and presumably to make data collection more manageable. Expect to do a lot of walking and mingling with other players for a few weeks until new content rolls out in Phase 2. You can learn more about what Frontier has lined up for each Alpha Phase in their Alpha Rollout Plan, which is available below. 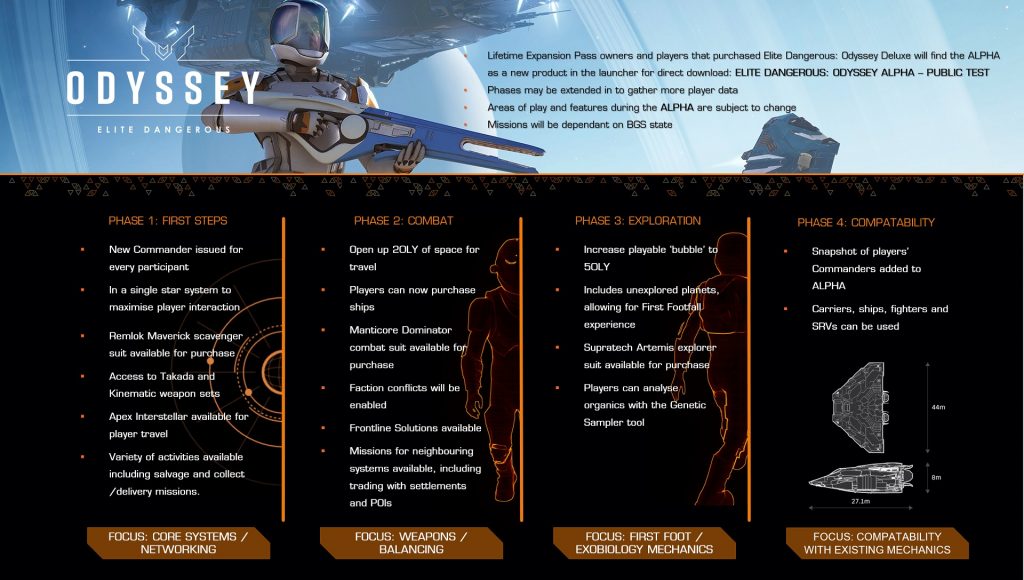 During the Odyssey PC Alpha, players can participate in various activities, including salvage missions and collection/delivery missions. Rather than flying a personal spaceship, players looking to travel between planets and embark on groundside missions must instead rely on Apex Interstellar Transport, Odyssey’s newly introduced transportation system. The ability to purchase ships will arrive during Alpha Phase 2. Players are also able to buy the Remlock Maverick scavenger suit and the Takada and Kinematic weapon sets during Alpha Phase 1.

Elite Dangerous: Odyssey fully releases for PC in late spring 2021. Those looking to join the PC Alpha test can do so by pre-ordering the game on Steam, Epic Games Store, or the Frontier Store.

Elite Dangerous: Odyssey Lands on PC in May