Few things will motivate Guardians like getting information from Bungie and helping those in need. This is why the GuardianCon Charity Marathon for the St. Jude Children’s Research Hospital was the perfect storm for players, as the opportunity to help a great cause and hear Luke Smith dish on what’s up with the Lord of Wolves exotic “shotgun” presented itself.

The GuardianCon Charity Marathon is to benefit the St. Jude Children’s Research Hospital. While the event is ongoing even now, Bungie took their turn with a live stream slot on June 20, 2019 from 4 p.m. EDT to 8 p.m. EDT. During that time their goal was to raise $150,000 for the cause, and to do this they introduced both individual and overall donation goals. Players could donate $10 to get the Sign of Gambit emblem, or $50 for the Gateway to Knowledge emblem. If players were able to raise $150K total over the four hours, dmg04, a Community Manager at Bungie, would get a Destiny 2 tattoo.

The problem with this plan is that the Destiny 2 community takes some things very seriously, like helping kids, getting emblems, and hearing Luke Smith explain what the hell is going on with the Lord of Wolves exotic in Destiny 2 these days. That’s why the $150K overall goal for the St. Jude Children’s Research Hospital was smashed early enough that they needed more community goals. On the fly, Bungie opted to introduce a $300K goal of having Dave Samuel, known for his unique sound effects, shout cast a match on the stream. The $350K goal was to have Destiny 2 Game Director Luke Smith join the stream and explain what is going on with Lord of Wolves. Both goals were smashed as Bungie ultimately raised $400K.

Luke Smith on Lord of Wolves 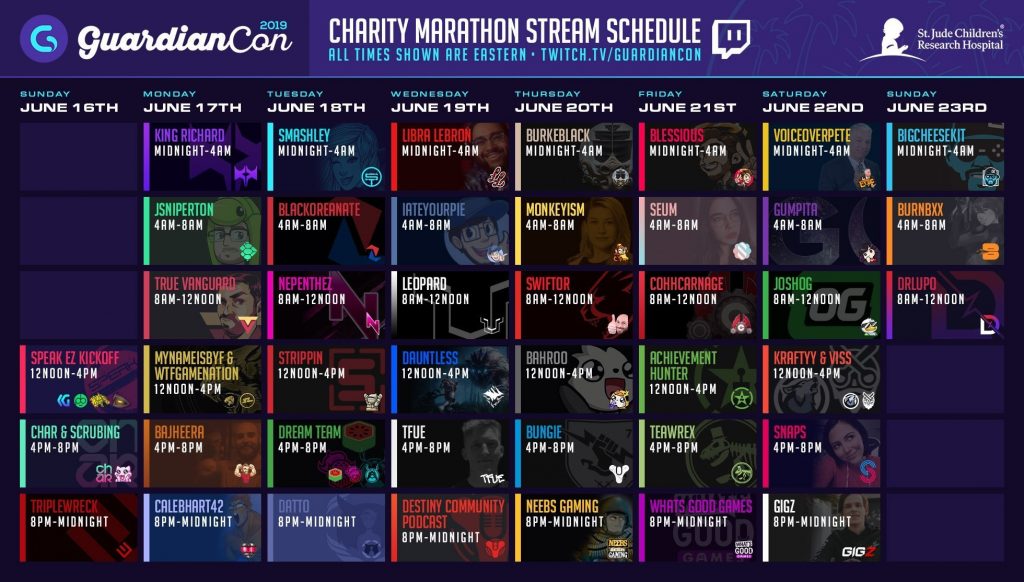 Luke Smith addressed Lord of Wolves but it was rather brief. Bungie knows the gun is working better than expected and has discussed what to do about it. The option to just turn the weapon off for now came up but they decided not to do that. Unfortunately, patching it isn’t an overnight process, and the next patch is already too far along to include a fix. The plan right now is to fix Lord of Wolves sometime in July, which seems like a long way off. To compensate anyone who plays Iron Banner this week Bungie will add a Triumph to commemorate their experience. While Smith did say it was possible to fix the weapon quickly, this would mean putting developers into crunch mode. I think I speak for more Destiny 2 players when I say we’ll be fine until the patch in July.

This sort of honesty from Bungie is refreshing. Too many times players are left to guess why something is broken or isn’t being fixed as quickly as desired. Having the options laid out, and the reason behind the studio’s selection explained, helps to alleviate the negativity. Now, when someone dunks on me with Lord of Wolves in the Iron Banner tonight, instead of just being angry I can appreciate that it’s better for me to endure this minor inconvenience than have a developer working too much overtime and stressing themselves out.

The Festival of the Lost is Back in Destiny 2