Bungie has released a roadmap leading to its next big expansion in Fall 2019. This roadmap is going to have a lot of events for Guardians to take part in to get ready for their next adventure. Destiny 2 update 2.5.2.2 has a few changes that will make some pinnacle weapons a little easier to get. 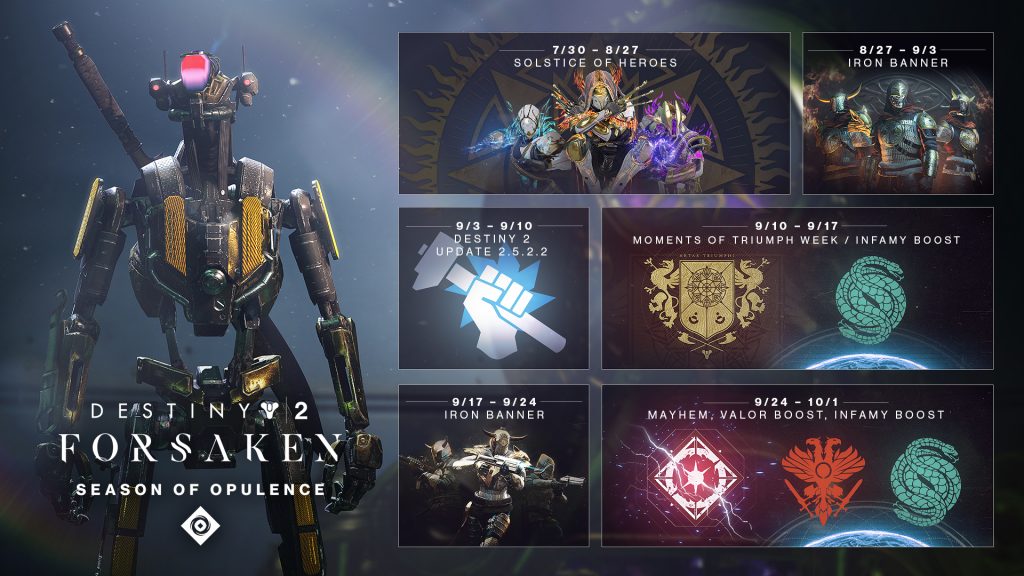 With the news of Destiny 2: Shadowkeep and New Light release date being delayed, players were eager to hear how the next two months were going to go. Bungie released a roadmap to help Guardians stay busy until they return to the Moon. Below you’ll find out what to expect in the Destiny 2 update 2.5.2.2.

As of now, the Mountaintop is a difficult pinnacle weapon to get. Players will need to get kills, multi-kills, earn medals and reach Glory rank Brave and Fabled in Competitive Crucible. Glory only increases when players win, making each match important. Players must use a grenade launcher to make progress.

The Wendigo GL3 requires players to earn kills, multi-kills, and earn points by defeating enemies in the Vanguard Strike list while using a grenade launcher. Luckily we have a guide on how to earn the Wendigo GL3.

From August 27 to October 1, players will be able to earn more Infamy and Valor thanks to a bonus XP week. The five day boost will help players reach milestones like resetting Infamy and Valor.

Destiny 2 update 2.5.2.2 will release on September 3, 2019. Once those changes are made, we will update accordingly. If you’re a little eager to slowly make progress on the Mountaintop or Wendigo GL3, nothing is stopping you. Destiny 2 is available for PC, PlayStation 4, and Xbox One.