We have finally reached the thirteenth season of Destiny 2. Season of the Chosen features a new storyline that pits players against Cabal forces. New and returning Strikes as well as a new Battlegrounds mode are among the many activities players can partake in throughout the season. Plenty of new weapons and gear items are available to earn along the way.

Season of the Chosen is available now in Destiny 2 and will continue until May 11, 2021. Below is a calendar of key events in Season of the Chosen, including dates for the new Proving Grounds Strike as well as the Guardian Games. 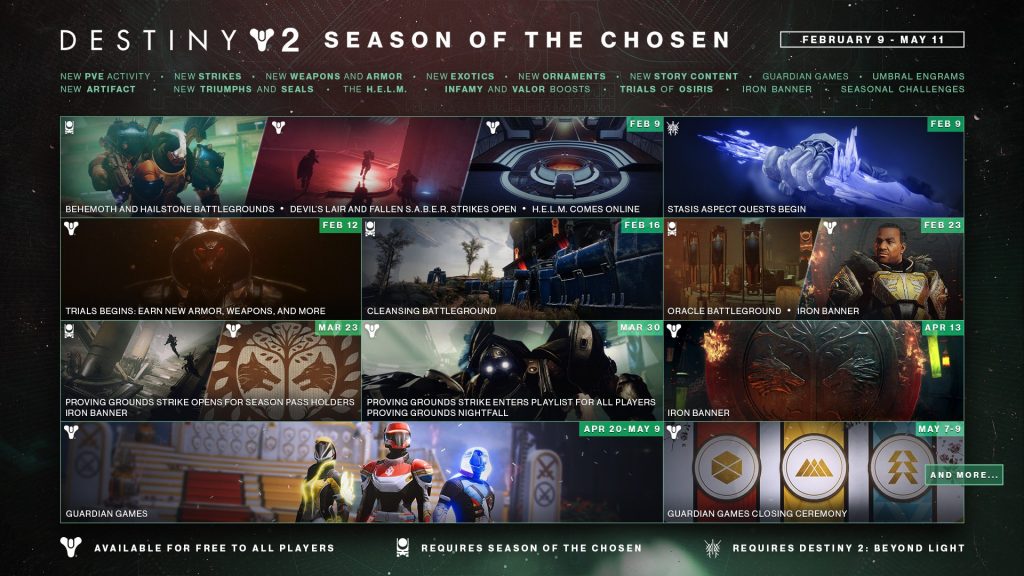 Season of the Chosen introduces a new Vanguard staging ground called the H.E.L.M. This central hub area will act as a launching point for seasonal content throughout Year 4. Starting today, Guardians can access the H.E.L.M. and visit the War Table where you will conduct missions and meet Vanguard characters. This is also where Guardians can obtain the Hammer of Proving, a new pursuit item tied to Battleground events. New areas of the H.E.L.M. will become available as new seasons are introduced.

Alongside new weapons and armor, Season of the Chosen marks the return of Umbral Engrams to Destiny 2. Players will be able to focus engrams using Prismatic Lenses, which are earned by completing certain objectives. Engrams can be focused towards three different reward tiers based on the player’s desired reward outcome, giving players a better chance at scoring the rewards they want.

Two Strikes are available at the start of Season of the Chosen: The Devil’s Lair and Fallen S.A.B.E.R. Both of these Strikes are making their return from the original Destiny. The new Proving Grounds Strike will open at the end of March.

A slew of bug fixes and gameplay adjustments were also made as part of the Season of the Chosen update. You can find the full patch notes for Update 3.1.0 on the Bungie website.

How to Watch the Destiny 2 Witch Queen Reveal Showcase

Complete the Vault of Glass Raid in Destiny 2 This Saturday