With only a few days left until the release of Cyberpunk 2077, fans worldwide want to know exactly when the game will become available next week. On Thursday, developer CD Projekt Red revealed the global release times for Cyberpunk 2077 on Twitter to help players prepare for launch day. The tweet also revealed the pre-load times for console and PC.

The official release date for Cyberpunk 2077 is December 10, 2020. However, depending on your region and platform, you may get your hands on the game a bit early.

CD Projekt Red has created a handy infographic depicting the global release times for Cyberpunk 2077. The game will release on PC and Stadia simultaneously at midnight GMT. Generally speaking, if you live in a time zone west of the GMT zone, then the game will likely be available to you on Wednesday, December 9 instead. Check the infographic below to see exactly when Cyberpunk 2077 launches in your region. For console players, Cyberpunk 2077 releases at midnight local time on December 10. 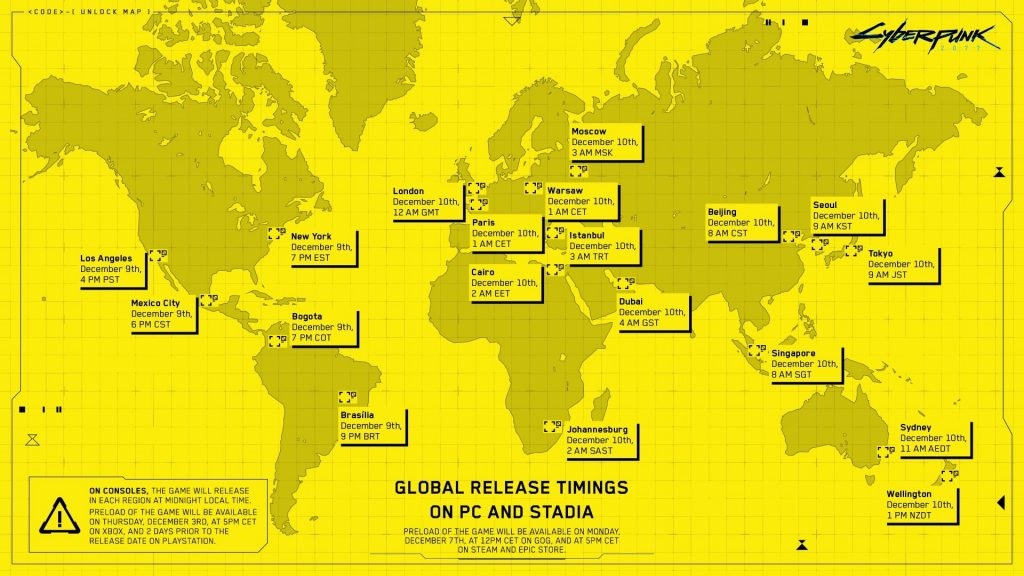 CD Projekt Red also included the game’s pre-load times for consoles and PC. Pre-loading went live this past Thursday for Xbox players. On PlayStation, pre-loading won’t be available until “two days prior to the release date,” according to the infographic.

For PC players, pre-load times will differ depending on where you bought the game. On GOG, pre-loading begins on Monday, December 7, 2020 at 12:00 p.m. CET. Those using Steam or the Epic Store can start pre-loading the game the same day at 5:00 p.m. CET.

Despite having been delayed more than once this year, it seems safe to say that this is the final release date for the game. Hopefully you are as excited as we are. Stay tuned for more Cyberpunk 2077!