Activision and Treyarch have unleashed a new season of content for Call of Duty: Black Ops 4, adding loads of new weapons, items, and features to the game’s multiplayer, Blackout, and Zombies modes. The new update, titled Operation Grand Heist, kicks off today on PlayStation 4 and will be available for Xbox One and PC in the days to come. You can catch a glimpse of the new season content in the trailer below.

According to Treyarch’s Operation Grand Heist roadmap, there are plenty of new features in store for all of Black Ops 4’s three game modes. For multiplayer, this content update marks the return of the Outrider Specialist from Black Ops 3, a longbow-wielding fighter who can shoot explosive arrows and can tag enemies on the map using a special pilotable drone.

This season will see the return of some classic multiplayer game modes as well, starting off with One in the Chamber. Infected, Barebones, and Prop Hunt modes are scheduled to arrive later this season. Alongside these new multiplayer modes, players can also look forward to a major tuning update as well as new weapons, outfits, and camos. 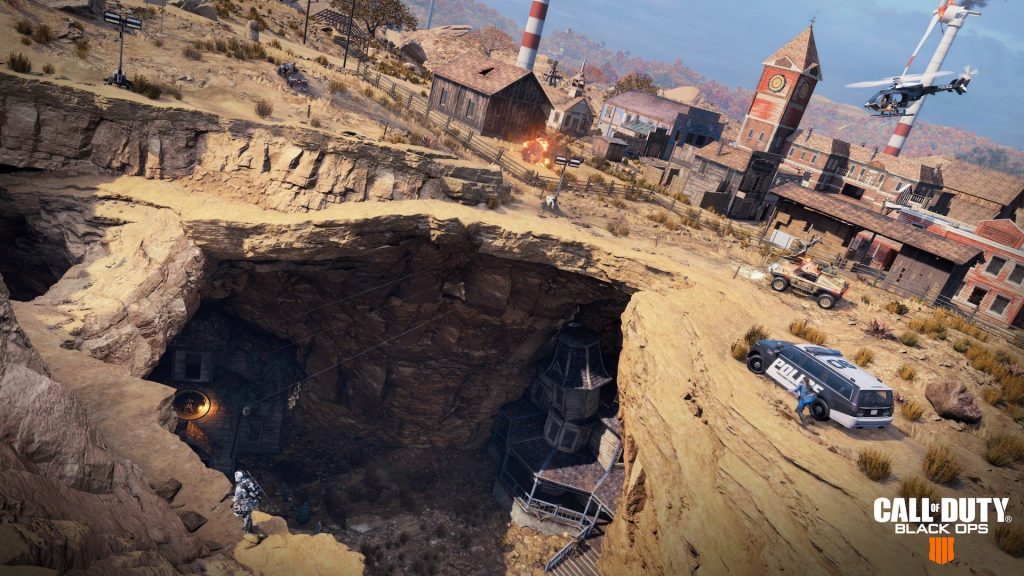 Blackout players also have plenty to look forward to in the Operation Grand Heist update. A new location called Ghost Town has been added to the southeast part of the Blackout map near Turbine. Ghost Town combines the layouts of the multiplayer map Outlaw and the Zombies map Buried to create a new Western-themed town to explore above ground and a sprawling series of underground tunnels below. Several other areas of the Blackout map have been tweaked as well, so keep an eye out for these changes next time you drop in.

Black Ops Pass owners can dive into Blackout as the exclusive Cosmic Silverback character, a throwback to the spacesuit-wearing gorilla from Dead Ops Arcade. If that wasn’t enough, Blackout is also getting a new respawn mode called Hot Pursuit, which features three new vehicles, a Muscle Car, SUV, and PBR. A new Hardcore Mode and a spring map update are scheduled for later this season, so keep an eye out for more changes to Blackout in the coming months.

As for Zombies, a new Death-Con Five Gauntlet has been added to Black Ops 4, along with the new Ethereal Razor Perk and a series of new weapons and signature weapons. Host migration, server pause, splitscreen pause, new Elixirs, and the Hellcatraz Gauntlet are planned to arrive later in the season.

Call of Duty: Warzone is a Free-to-Play Standalone Battle Royale

Overwatch, Diablo, and Call of Duty Will Come to Game Pass, Eventually