It’s official. Today, Gearbox unveiled the release date for Borderlands 3, along with details regarding each of the game’s special editions and pre-order content. Keep reading to learn about what’s in store.

Borderlands 3 will be released on September 13, 2019 for PlayStation 4, Xbox One, and Windows PC, where it will be exclusive to the Epic Games Store until April 2020.

Gearbox broke the news with an official announcement trailer for Borderlands 3. In it, they showcase gameplay of the game’s four new playable characters: Amara, FL4K, Moze, and Zane. You can get a feel for each of these new Vault Hunters and their abilities in our Borderlands 3 character breakdown.

These four Vault Hunters and their billions of guns face off against the Calypso Twins, the new threat in Borderlands 3. Currently, few details are known about these devout villains, but you can catch a glimpse of them in the game’s reveal trailer.

As of right now, Gearbox plans to release four editions of Borderlands 3 alongside the standard version of the game. Each pre-order comes with a bonus Gold Weapon Skins Pack, which contains gold attachments that apply to all of the game’s billions of guns. 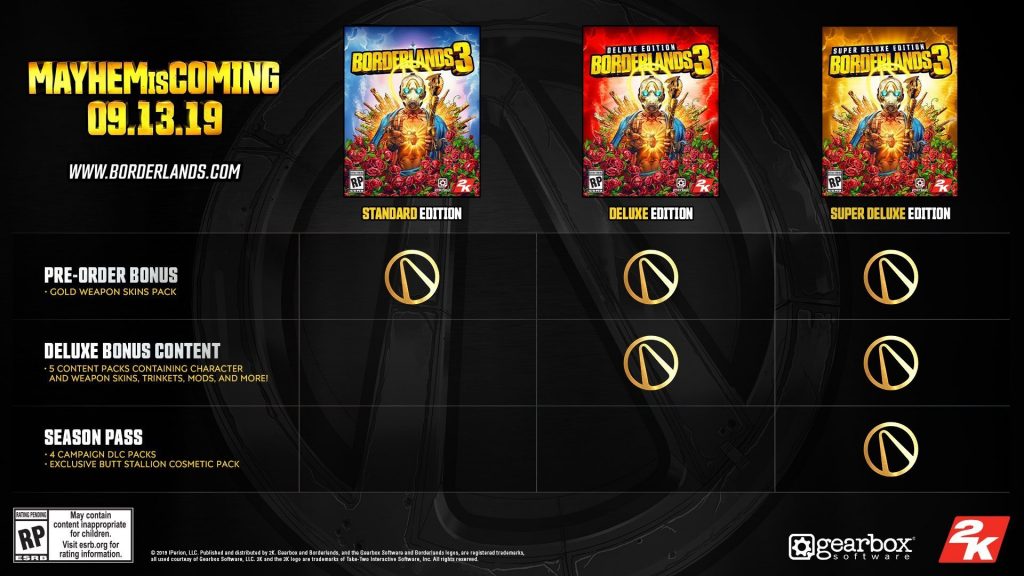 The base game, without the bells and whistles. The pre-order bonus still applies, however.

Includes the base game and some bonus digital content:

Comes with all the bonus digital content of the Deluxe Edition, but also throws in the Borderlands 3 Season Pass, which includes:

Created for true Borderlands enthusiasts, the Diamond Loot Chest CE comes packed with the full game, Season Pass, and all bonus digital content included in the Super Deluxe Edition, plus:

To learn more about the game, you will have to wait until next month. Gearbox is planning on hosting a live gameplay reveal session on May 1. Until then, you can pre-order one of the editions above and mark your calendars with Borderlands 3’s release date on September 13.

How to Watch the Live Borderlands 3 Gameplay Reveal