Warframe’s Nightwave Intermission II continues with a very interesting item up for grabs, the Wolf Beacon. By completing Nightwave Challenges, and ranking up, you can earn Intermission Cred as a reward. This currency then allows you to buy items from the Cred Offerings. These include cosmetics, weapons, mods, and the Wolf Beacon. 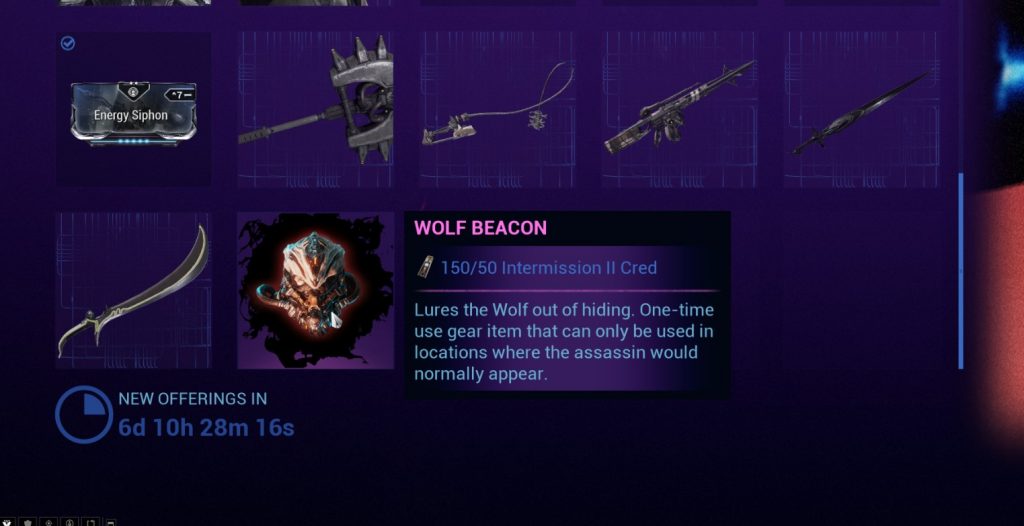 The Wolf Beacon is a one-time use item that will allow you to summon the Wolf of Saturn Six into your mission. You can then fight and kill him, and see if he drops any nice loot for you. It is primarily aimed at people who might be short of one or two drops for his hammer weapon. You can purchase the Wolf Beacon from the Cred Offerings for 50 Cred.

To use the beacon, simply go to the Arsenal, and place it in a slot in your gear wheel. When you are in the mission, select the item from the wheel and use it to call the Wolf of Saturn Six forth. You can use the Wolf Beacon in almost any mission. However, you cannot use it in Syndicate or Assassination missions, Sorties, Sanctuary Onslaught, Archwing missions, or Free Roam areas. If you are in a mission where you should be able to use it, but find you cannot, it means the mission has been marked by another assassin. This means the Stalker or the Grustag Three are likely to show up.

Who is the Wolf of Saturn Six?

The Wolf of Saturn Six was the main antagonist from the first series of Nightwave. A prisoner housed in the Saturn Six facility, he escaped and went on a rampage against his former jailers. He was later experimented on by Alad V and was changed by Sentient technology. He is a tough fight for most Tenno but is weak to Puncture damage, Cold damage, and Radiation. I found great success against him with a Rubico Prime modded for Radiation damage, although melee weapons like a Plague Kripath are also useful.

If you do plan on taking on the Wolf, be sure to bring the right weapons for the job. Otherwise, it can be a long and arduous fight. Best of luck, Tenno!

How to Do Blast Damage in Warframe