A Picture of Mr. Black is one of the main story missions in the Layton Lakes district of theHunter: Call of the Wild. It requires players to sneak up on a black bear and get a clear image of it from close range. Due to how easily animals spook upon approach, it’s a mission that quite a few players struggle with. This guide will explain how to properly tackle A Picture of Mr. Black.

A Picture of Mr. Black 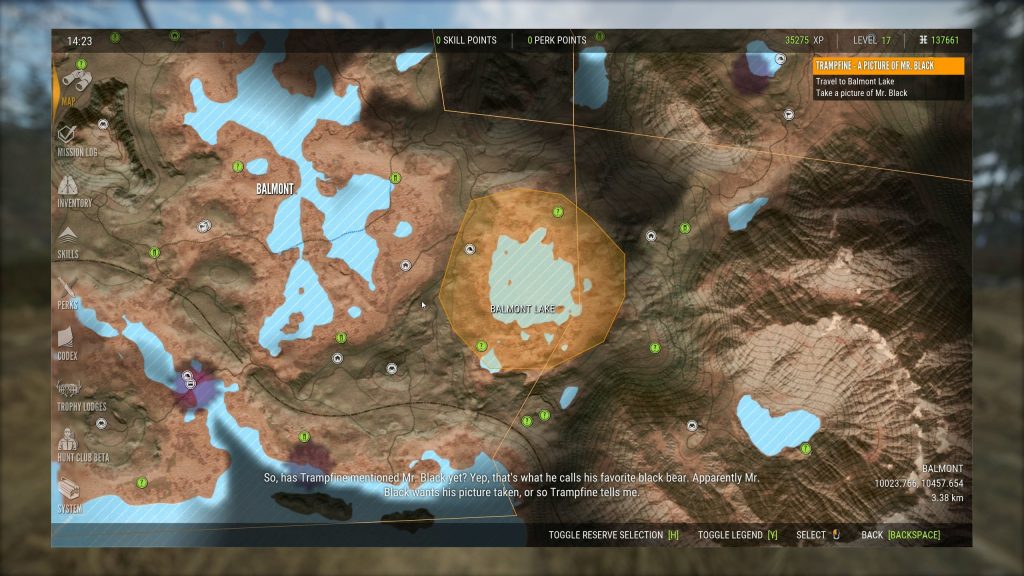 When active, there will be a highlighted zone around Balmont Lake. There is an Outpost to the east that players can spawn in, but I opted to plop a tent down a few missions prior. The tent was about 150 meters to 175 meters east of Balmont Lake where Mr. Black is found. Once the mission was live, I fast traveled to the tent.

Because you’ll approach Mr. Black moving from west to east, it’s imperative the wind be blowing in your face, or at least away from the bear, not towards it. If not, sleep for a bit and see if it changes direction.

Once you have favorable wind, crouch walk until you’re about 125 meters from Mr. Black. You could potentially get closer, but why risk it and deal with him fleeing and need to wait for him to reset? At about 125 meters out, spot Mr. Black, then bring up your map. If you zoom in on Balmont Lake, you will see an icon for the last known position of the bear. Zoom in as far as you can and place a way point on its location. This will give you rough idea of where your target is without having to see it or spot it again. Mr. Black will not move more than a few feet if you don’t spook him. 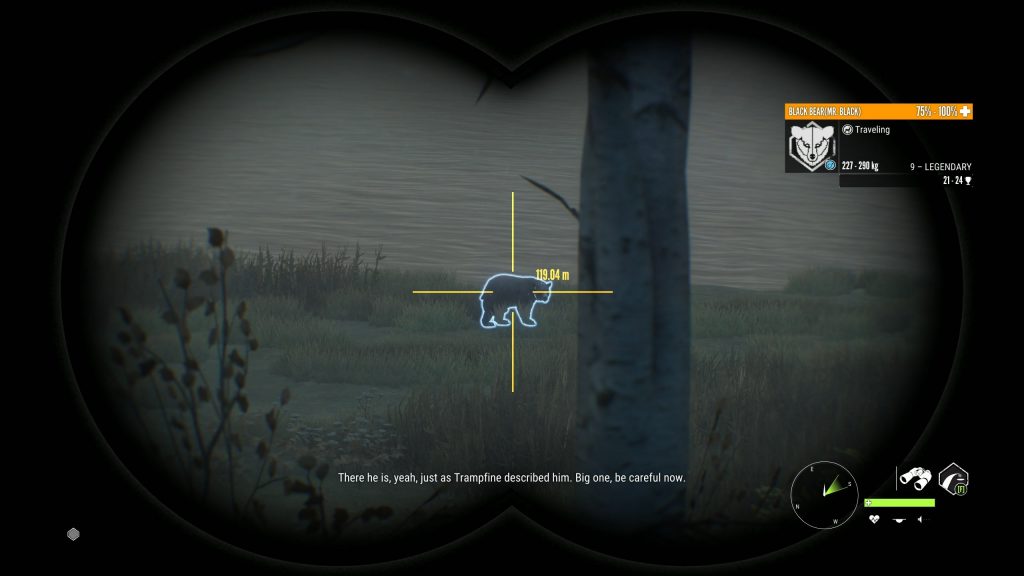 Crawl towards the black bear so you can take A Picture of Mr. Black. This could eat up five or six minutes, but patience is key. As you get close, you’ll begin to hear the bear, but if you are on your belly and not trying to quickly crawl, then it should remain unaware.

The biggest problem is going to be seeing Mr. Black through the tall weeds. Even if you spot the top of its head, that picture often won’t count. I had to stand fully up to see the bear, which alerted it to my presence and caused it to charge. This is when I began taking as many pictures as I could, and it worked. Once you’re on top of Mr. Black, make sure your camera is permanently equipped so you can take multiple photos, none of which should included any degree of zoom.

If for some reason you fail, don’t try to track Mr. Black. Yes, it can be done, but it’s a pain. Just go away for a bit and hunt or do other side missions. Enjoy the game. In a few hours, consider exiting to the main menu and then coming back in, sleeping until the next day in the tent close to the bear if you have one. He’ll eventually spawn back at his original location and you can try again. Don’t get frustrated chasing him all over the map.

Now that you know how to complete A Picture of Mr. Black, be sure to visit the rest of theHunter: Call of the Wild content we have been cooking up lately.

Night Vision Scopes and Binoculars Headed to theHunter: Call of the Wild

Animal Droppings and Times in theHunter: Call of the Wild

Call of the Wild: The Angler Announced for PC and Consoles

High-Tech Hunting Pack Out Now in theHunter: Call of the Wild

Weapon Pack 3 Release Date for theHunter: Call of the Wild