Briggsy is a powerful Skeleton Lord at the end of the Cursed Rogue voyage in Sea of Thieves. This is a major boss fight that will take crews quite a long time to finish. However, with the right strategy and a few gunpowder kegs, defeating Briggsy is possible for any crew!

Early reports seem to indicate the Briggsy fight scales with crew numbers. Solo players will have to deal with a Briggsy with less health while a full galleon will have a very health-heavy Briggsy to defeat.

Prepare for the Briggsy Fight 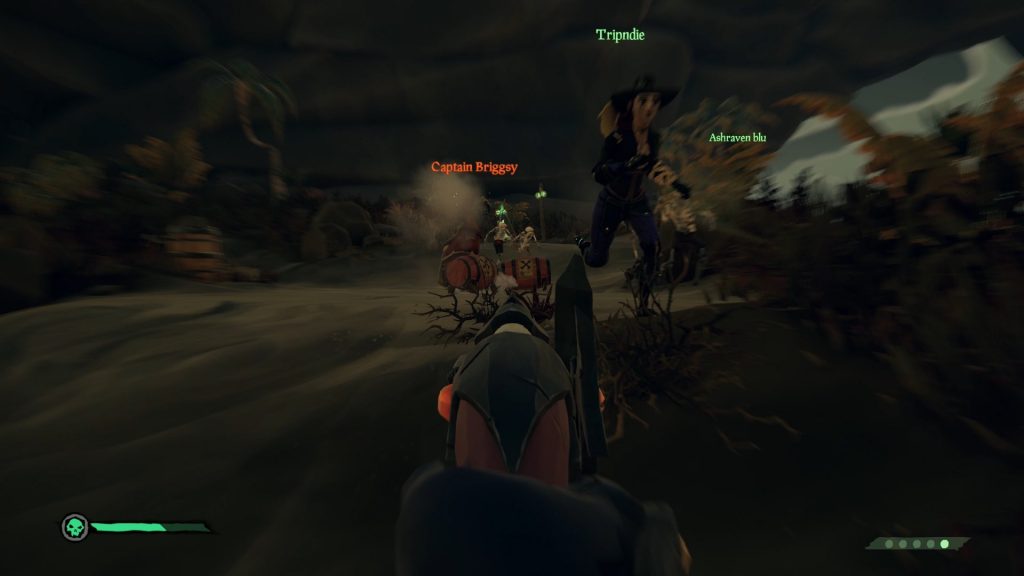 Before attempting to kill Briggsy, it’s important to stock up for the fight. Collect as many cannonballs, fruit and meat, and gunpowder kegs as you can manage. A good idea is to stop at a skeleton stronghold on the way to the Briggsy fight. Each gunpowder keg does considerably more damage than a cutlass or even a cannon shot.

If you’ve gone fishing and have any meat, cooking it up and eating it for the health regeneration is helpful. Depending what island you fight her on, there may not be an abundance of resources to rely on during the fight. Better to have a well-stocked ship before going in to avoid having to retreat to resupply. 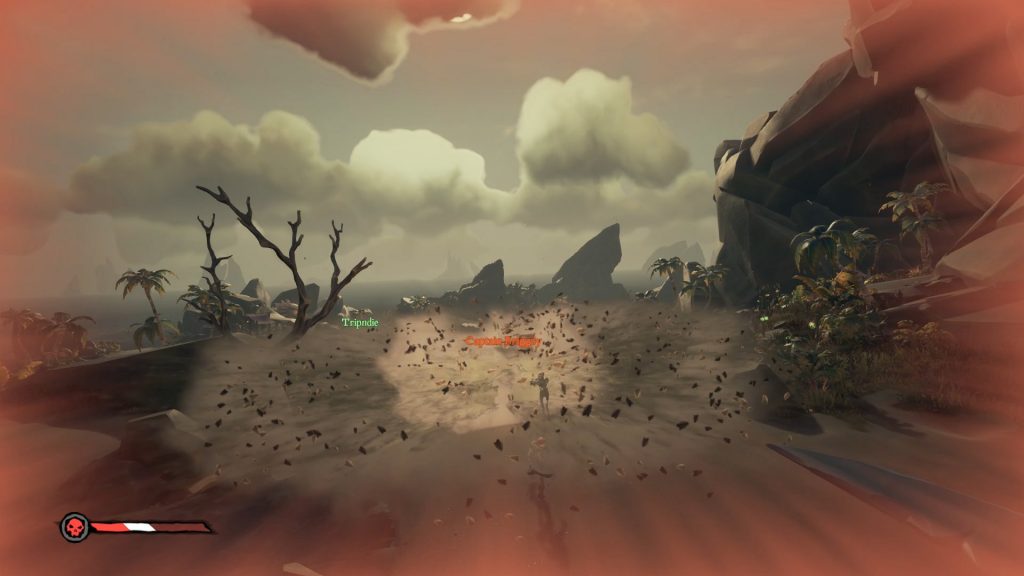 Briggsy’s stomp attack deals a whole lot of damage, learn when she’s about to do it and then run away!

Unlike the skeleton captains on stronghold forts, Briggsy has a few abilities. These abilities aid her in battle and make her extremely difficult to manage.

Summon Skeletons: Briggsy will rise up skeletons from the ground to attack for her. She can do this multiple times, adding more and more enemies to the field. Taking the time to clear the skeletons is key, as they can easily overwhelm even the most experienced crew.

Teleport: Briggsy has a teleport move where she disappears in a cloud of smoke only to reappear somewhere on the battlefield. Though this doesn’t pose a threat to you, it can be difficult to track her down.

Stomp: The stomp attack is Briggsy’s most powerful ability. She will raise her hands into the air, hover for a brief moment, and then slam down onto the ground, sending out a massive shock wave. If you are anywhere near her or the surrounding area, you will be pushed backward and take a lot of damage. It is imperative you learn her telegraph so you can avoid this move.

While these are her three main abilities, she can also fire her flintlock, swing her cutlass, and eat bananas to heal.

How to Kill Briggsy 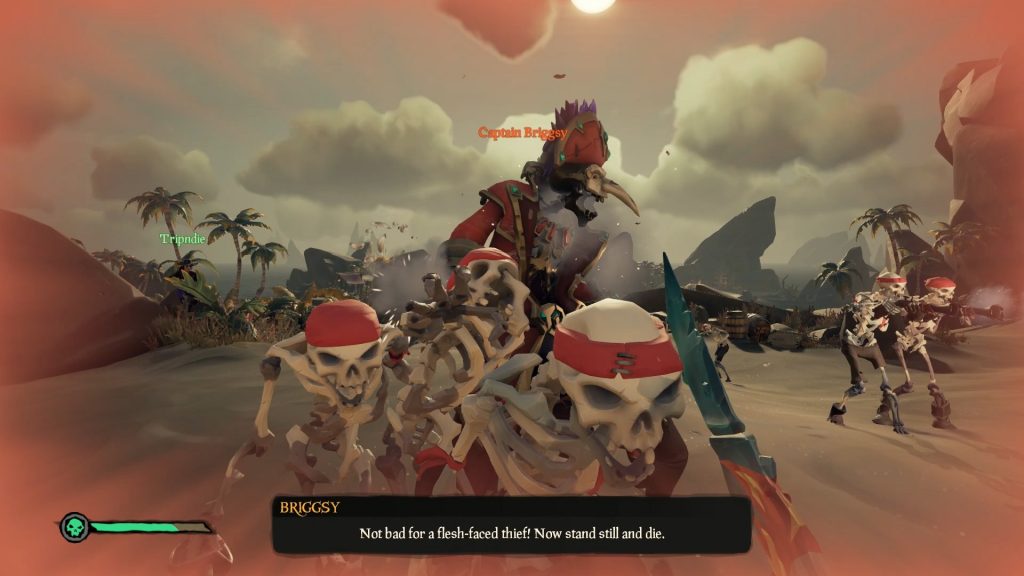 The main strategy for fighting Briggsy in Sea of Thieves is to manage the skeletons she summons and to attack her wherever possible. If she’s in range of your ship, having one player fire on her with the cannons is wise. However, depending what island she spawns on, you may not have a good line of sight. In fact, depending on your accuracy, it can be even better to have all four players use a Blunderbuss.

As for the gunpowder barrels you collected, these should be placed at her feet and then detonated. Do not use the fuse, as she could easily teleport away. Have one player drop the keg and another shoot it (with a ranged-gun) while the first one flees. Whenever someone dies, get them to bring a gunpowder keg to the battlefield once they spawn back in. 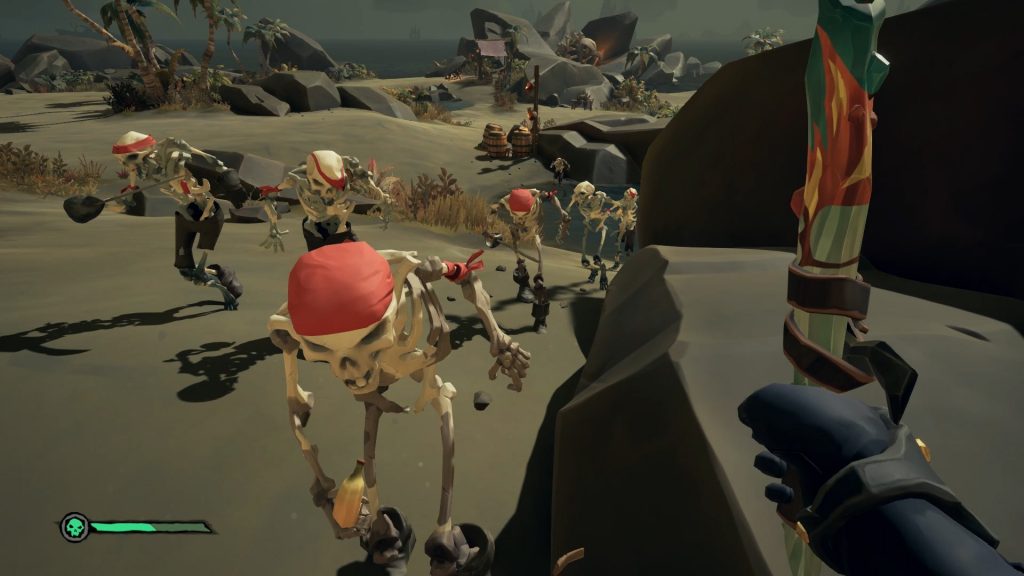 Have one player focus on clearing skeletons during the Briggsy fight.

There’s no guarantee your island will have an ammo crate in a good position, but if it does, make note of where it is and use it liberally during the fight. Your weapon will be your greatest asset when dealing damage to Briggsy, especially the Blunderbuss. Avoid using two guns as the cutlass is the most versatile weapon during this fight. Use it to clear groups of skeletons or get hits on Briggsy when out of ammo.

It can be worth assigning players separate roles. If your ship is in a good position, have one player use the cannons to help manage skeletons and deal damage to Briggsy. Another player could focus on taking out skeletons, corralling them together into manageable groups. If you have the numbers, two players could spend their time focusing on Briggsy and rotating to skeleton clearing if it gets intense. 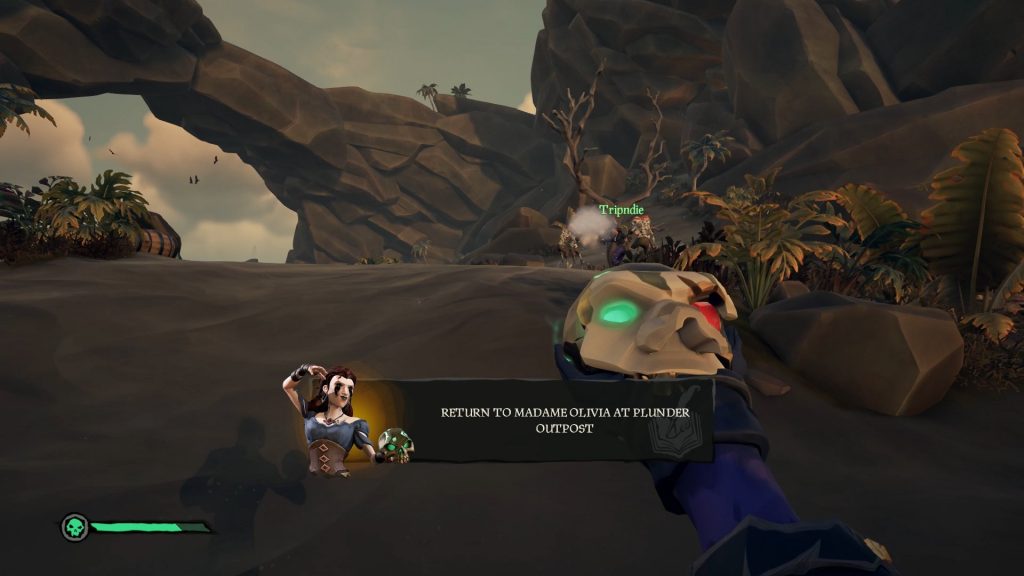 Take Briggsy’s skull back to Madame Olivia at Plunder Outpost to complete the Cursed Rogue voyage.

Even a well-oiled crew might find the Briggsy fight takes 20 to 30 minutes to complete. The challenge comes from managing the constant spawning of skeletons and finding time to attack Briggsy. The key to this fight is patience and persistence.

If you’re able to bring all these tips together, you should be able to defeat Briggsy, Sea of Thieves’ latest and greatest addition. With this Skeleton Lord beaten, return to Madame Olivia at Plunder Outpost and hand over Captain Briggsy’s skull to finish the Cursed Rogue portion of the Shores of Gold Tall Tale.