There are a lot of weapons in Fallout 4, but not all are created equal. While standard weapons can be very good, weapons with unique or legendary effects are superior. Players can acquire legendary weapons randomly any time they kill a legendary enemy (with a star next to their name), or they can seek out the collection listed below, which are always in the game and obtainable through quests and by discovering them in the world. 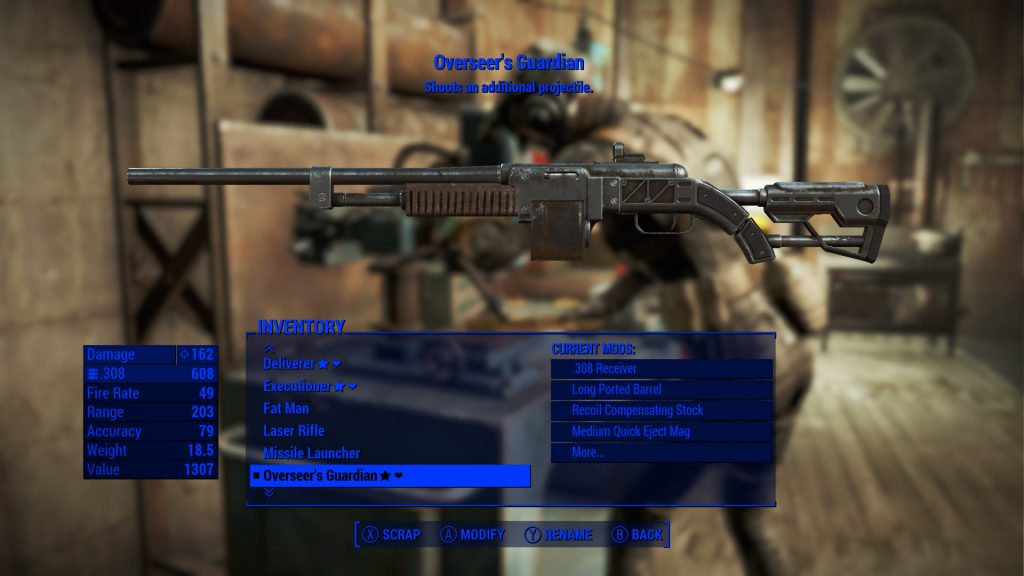 This is objectively one of the best guns in the game, and it’s obtainable in the first couple hours in Fallout 4. Overseer’s Guardian has the legendary Two Shot effect that means it shoots an additional projectile. If the weapon does 100 base damage, you can double that to 200 since there will be two bullets. The best part is that it doesn’t cost the player two bullets. The second projectile is free.

Players can get the Overseer’s Guardian Combat Rifle from Alexis Combes in Vault 81. Expect to pay a hefty price when you consider how early in the game it’s likely to be. Make sure that you’re wearing clothing items with Charisma perks when you trade and, unless you can pass the speech check, you’ll need three Fusion Cores to get into Vault 81 in the first place. 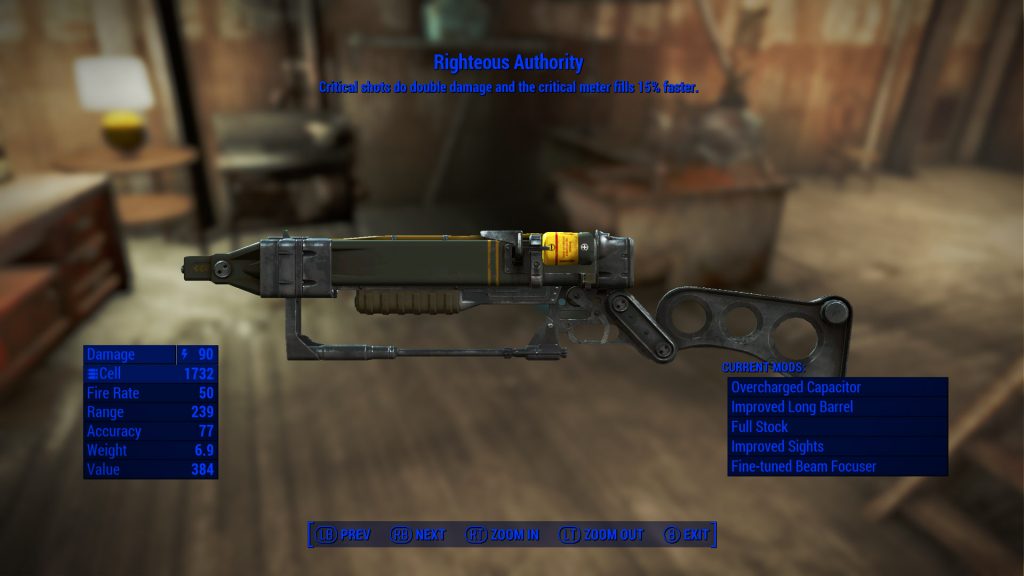 Here’s another weapon that players can score early in the run, making it worth mentioning at the top of the guide like the Overseer’s Guardian. This weapon comes with the legendary effect called Lucky, where critical shots do double damage and the critical meter fills 15% faster. This Laser Rifle is meant for a VATS build and will be particularly useful against tough enemies, allowing players to deal massive damage with their critical shots.

To get this weapon, players will need to complete the Call to Arms quest, which is sort of on the way from Concord to Diamond City, making it an early game gem. Head to the Cambridge Police Station to begin the quest or tune your Pip-Boy to Military frequency AF95 when you’re close enough and prompted to do so. Paladin Danse will give this weapon to players once Call to Arms is complete, making it a good option if you’re strapped for caps. 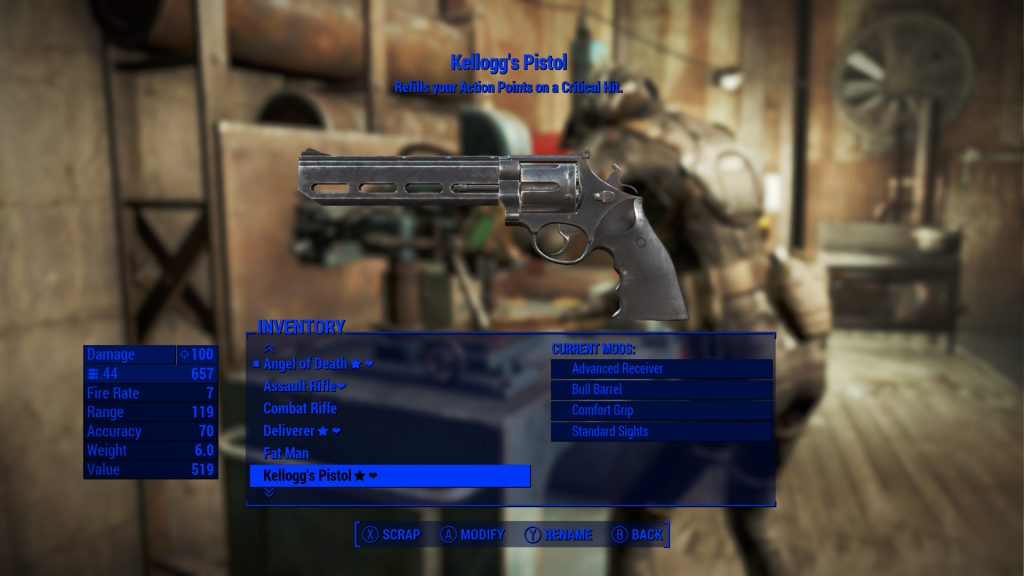 Spoiler alert, but this is the .44 Pistol used to kill your spouse in the first mission in Fallout 4, so you know it works, right? All joking aside, it comes with the Relentless effect, so it refills Action Points on a critical hit. This means that you could theoretically never run out of Action Points in VATS if you can build up your critical hits quickly enough. It also means that if your critical hit doesn’t kill your target, you get a fresh batch of Action Points to use, which is always helpful. To get Kellogg’s Pistol, loot it from his body after you kill him in the Reunions story mission. 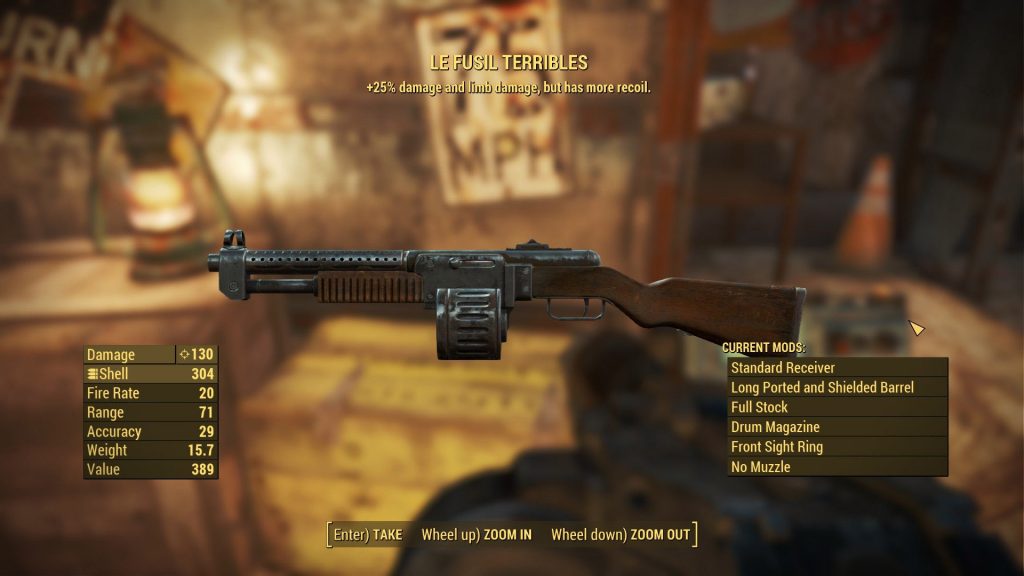 This Combat Shotgun is one I always make sure to grab when I’m playing Fallout 4. It comes with the Violent effect, meaning +25% damage/limb damage but also significantly increased recoil. What I love about this weapon is that I get to play with my food. Shooting enemies in the legs often cripples them. If you’ve never blown the legs off a Ghoul and watched it crawl around helplessly while your companion beats it to death, you’re not playing Fallout 4 correctly.

To get Le Fusil Terribles, players will need to head to Libertalia and fight their way to the top of the giant structure. It’s in a crate on the top floor. You’ll likely find it during the Synth Retention quest, so if you don’t mind waiting you can just play the game and grab it after you start working with The Institute if you ever do. 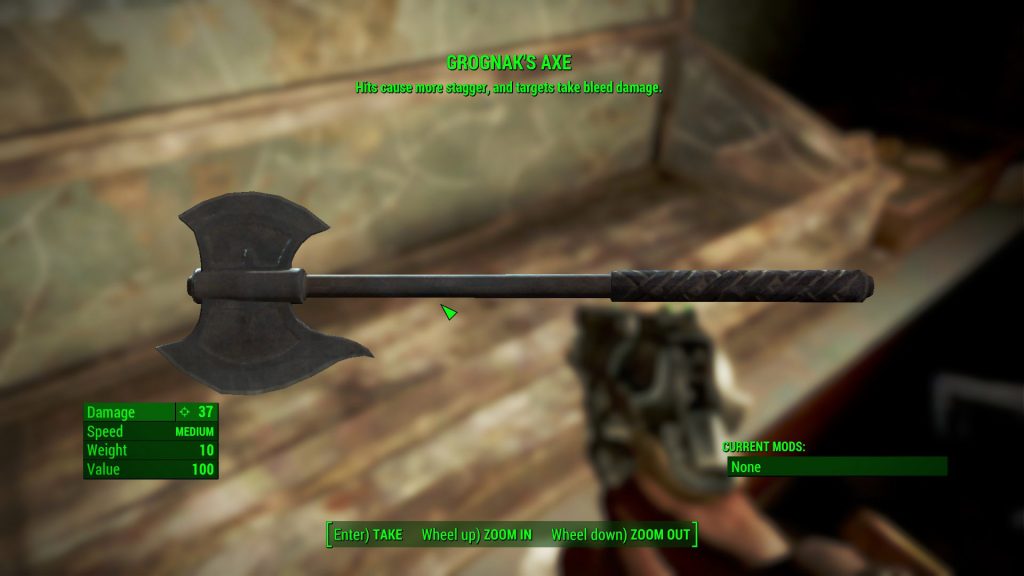 This weapon is a massive axe that players can grab just inside the front door of Hubris Comics, a location not far from Diamond City and part of the Silver Shroud quests. While it doesn’t have a unique or legendary effect, it’s still a unique weapon in that you can’t change its name and it doesn’t have a variant, meaning you won’t find other axes in Fallout 4. This is the only one.

Now, it’s not something that I enjoy using myself too often, but what I love to do is give it to my companion to use. Personally, most companions leave a lot to be desired when it comes to their weapon aim, so why not give them a giant axe and let them run into the fight. Most often this will distract your enemy (partly because Piper is chopping them to bits with an axe), allowing you to score those sweet shots in VATS. 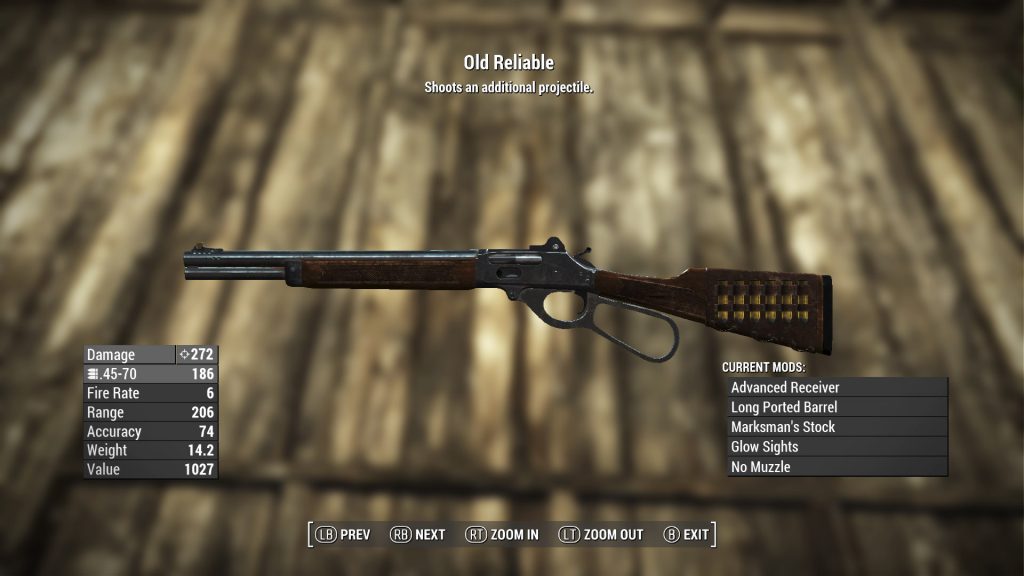 Old Reliable is only available if you make your way to Far Harbor and buy it from Dejen in Acadia. Like the Overseer’s Guardian, it has the Lucky effect, meaning it shoots an additional projectile. This Lever-Action Rifle takes .45-70, which cannot be crafted and is generally only found in Far Harbor. While major, this is the only downside of the weapon since it can do incredible damage. Load up your Charisma and buy this as cheaply as you can for a good time. 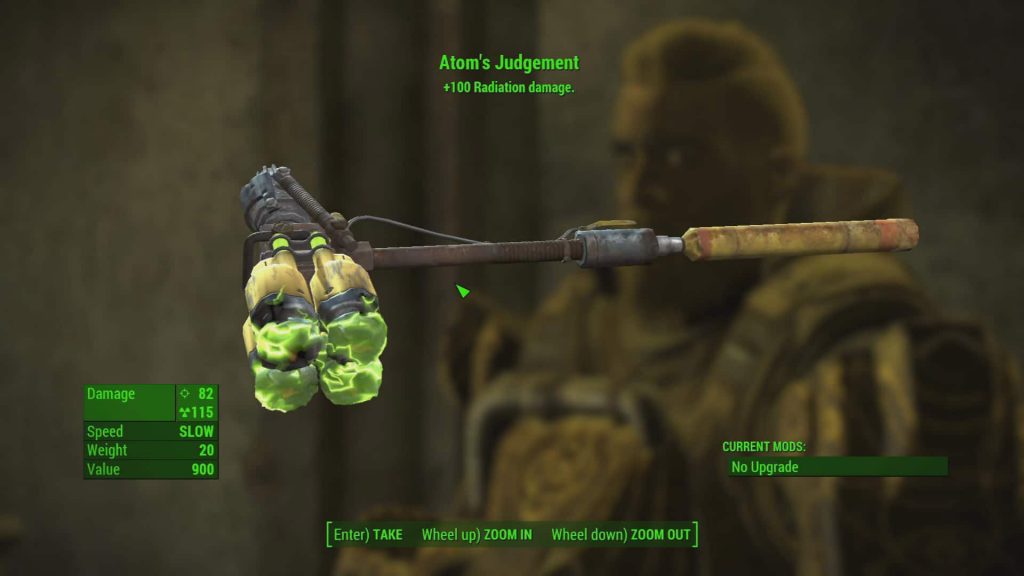 Man, Far Harbor has some good gear, and the Atom’s Judgement Sledgehammer is at the top of the list. While I’m not big into the melee gameplay, this is a lot of fun to use. Awarded through The Heretic quest, Atom’s Judgement is probably the most devastating melee weapon in the game. When fully upgraded, it can one-shot any human enemy thanks to the unique weapon effect Atom’s Judgement (same name as the weapon itself) and its +100 Radiation damage but might take a couple of swings on a few non-human foes. If you’re not a big melee player, give this weapon to a companion and, I don’t know, go have lunch while they kill everything. If neither option sounds good to you, put it on a rack or in a display case and just stare at it in all its glory.

I debated putting this one on the list, but it never leaves my person when I’m playing, and that must count for something, right? While it doesn’t boast great damage, the VATS Enhanced effect and ammunition availability put it over the top for me. It’s perfect for taking out smaller enemies, like bugs or even Ghouls, thanks to the improved 25% V.A.T.S. hit chance, 25% less Action Point cost. I find it a bit weak on most foes and would prefer to just use something else, but it’s light and provides a nice change of pace if the conditions are right. It’s also easy to get it. Just complete Tradecraft after you meet the Railroad and this gun is yours. 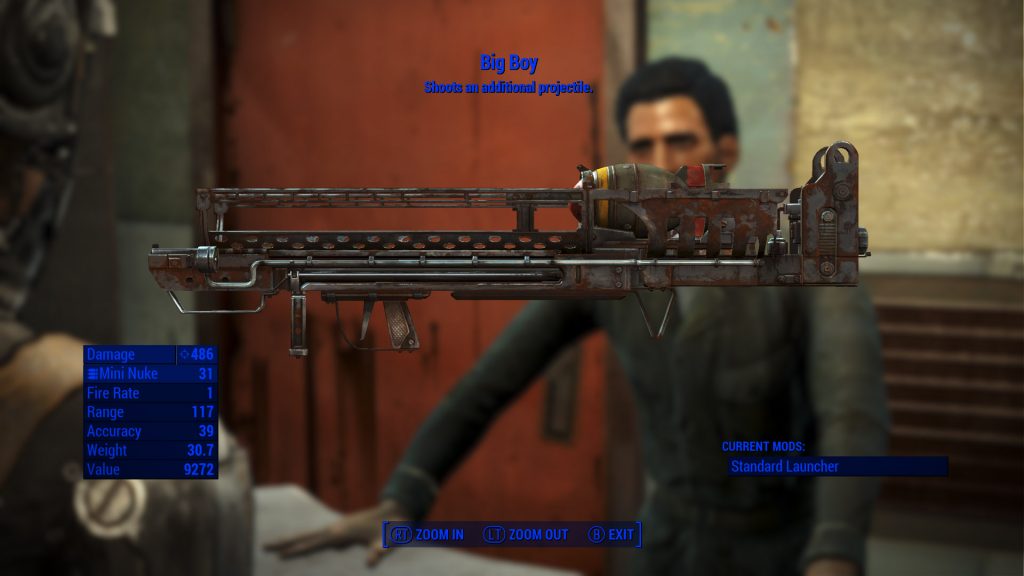 I just don’t find lugging around a Fat Man to be wise, but in the right circumstances, Big Boy is the way to go. Sold by Arturo in Diamond City (load up on Charisma before shopping), it’s the third weapon on my list with the Two Shot legendary effect, so it shoots an additional projectile. This means that every Mini Nuke you fire is going to be two, and I don’t need to spell out why that’s a good thing. I’m just not sure how wise it is to burn 30 or more pounds of your carry weight on this, although I did use a regular Fat Man to deal with Kellogg and that turned out swell. 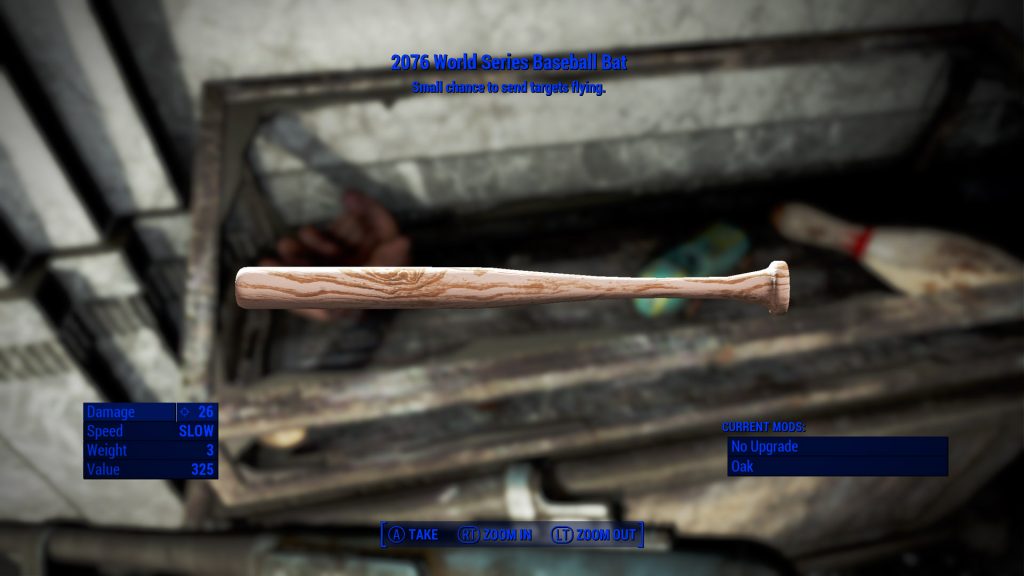 My final entry is going to be a fun one, but it works well for someone like me who doesn’t enjoy melee play much but still wants a melee weapon for the right circumstances. This Baseball Bat only weighs 3lbs and it has the unique effect World Series Logo, which in this case has a small chance to send targets flying. That’s the only reason I carry it. Sometimes you must decide someone’s fate in a non-combat situation, and I like to go all Negan on them with a bat. It’s also easy to get your hands on. If it’s not sold by Moe in Diamond City, it will be under city hall in Jamaica Plain. Preston will probably send you there eventually.

There are a lot more weapons to grab in Fallout 4, and we encourage you to browse the list over at the Fallout 4 Fandom Wiki, which was used as a reference for this guide. You can also check out any additional coverage we have using the link to our Fallout 4 game page. If you don’t, though, at least you have a good list of the best legendary and unique weapons to seek out the next time you take the Sole Survivor on a journey through the Commonwealth.

Where to Farm Rhino Prime Relics in Warframe