Destiny 2 is pitting players against each other in a unique way in Season of the Drifter. You can choose to pledge allegiance to the Drifter or the Vanguard. This guide will show you the Vanguard allegiance quest steps. 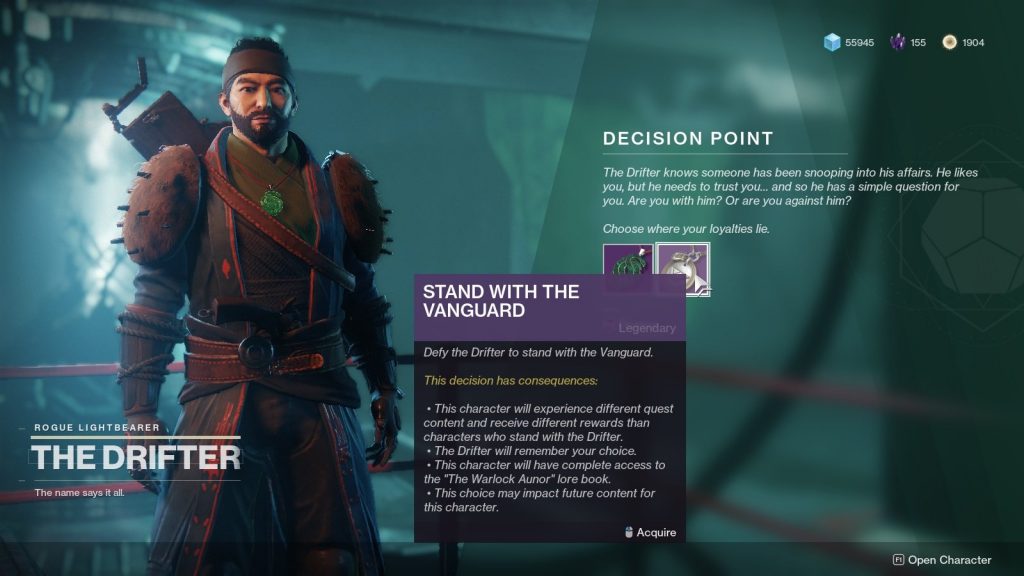 After choosing to side with the Vanguard, you’ll start The Investigation quest line. Choosing the Vanguard also lets you gain some new triumphs that hold some pretty valuable information.

The first step is to contact Aunor. Head to the Hanger, past Amanda Holliday, and look for a side area with a terminal. Gather the message to contact Aunor. Remember this spot as you will be returning here later.

A Message of Solidarity

Staying in the Hanger, head over to where Dead Orbit resides, and you’re looking at the Courier. The Courier is a human female standing next to the stairs near Dead Orbit. Drop off your message with the Courier.

Now it’s time to spy on the Drifter. Head to the Annex and plant three bugs for audio surveillance. These bugs can be planted in the Drifters room and the same spot if you choose to do so. Other places include the left and right of the Motes banked in the center of the room.

Now that you’ve planted bugs to spy on the Drifter, it’s time to head back to the Terminal in the Hanger to activate them.

It turns out that spying on the Drifter has paid off. The Drifter is sending someone to meet Spider to pick up an important item. Time to visit the Spider in the Tangled Shore before the Drifters agent does.

You’ll have to pay Spider 50,000 Glimmer to agree to stop trading.

Looking for a Lead

Once you’ve paid off Spider, he will fill you in that the Drifter might be planning something on Titan. Your next step is to load into the Rig and complete the Heroic reprise of Siren Song.

Aunor will task you with jumping into Gambit, despite the Drifter knowing you are siding with the Vanguard. Bank 50 motes in Gambit or Gambit Prime to finish this step.

Aunor is worried that guardians will actually get killed in the Crucible due to the Drifter flooding it with his followers. Time to jump into the Crucible and make sure everyone behaves accordingly. Defeat 25 Guardians to complete this step and head back to the terminal in the Hanger to decrypt messages.

After decrypting the messages, it’s time to head to the Derelict to search for any clues. Open the Gambit directory and select the small icon on the bottom right of The Reckoning called Mystery and Potential.

From the spawn point, head down the hall to your right, continue through the snowed-in room, and into what looks like the Drifters quarters in the Derelict.

Having listened to the recording, you will now have to collect seven more recordings that are scattered throughout the EDZ. All locations can be found in our Survival Guide.

After gathering the recordings it’s time to visit the Drifter in the Annex of the Tower, where he will call you a snitch. Once you have finished talking to the Drifter, talk to Ikora and receive the Praxic Loyalty Package.

Receiving the Praxic Loyalty Packages confirms that you have sided with the Vanguard. Did you make the right choice? Only time will tell.

If you’ve chosen to side with the Drifter, check out the Drifter allegiance quest line.