The Office Revolver is a Hand Cannon in Destiny 2 Season of the Worthy. This weapon can be obtained by putting in some work, but you will want to put in a little extra grinding to get the recommended god roll. This guide will tell you the recommended perks for the Seventh Seraph Officer Revolver god roll in Destiny 2. 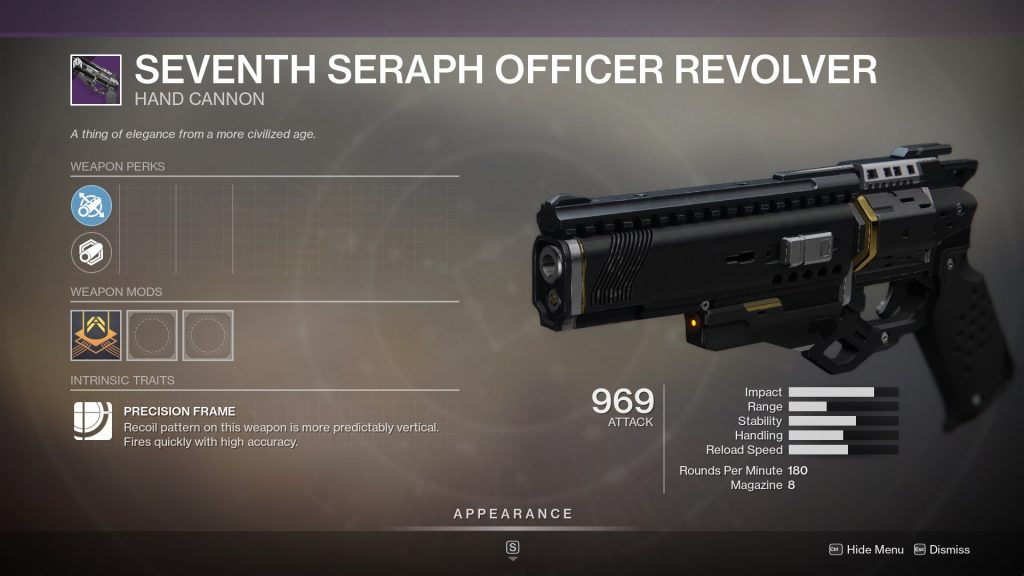 I think I am slowly coming around to being a fan of Hand Cannons in Destiny 2, mainly due to certain bounties or quests requiring you to use one (don’t tell Bungie). Now that I have gained a little more confidence in using one, I always have one in my inventory just in case. The Seventh Seraph Officer Revolver may just sway me to the Hand Cannon side, especially when it comes to PvP. Let’s begin with the PvE perks, though.

The barrels that are recommended will increase Stability, Handling, and Range.

Increasing magazine capacity is what you are looking for in the second perk slot.

The perk you’re looking for in this slot will increase your handling the Hand Cannon better or give a little extra ammo.

The last perk slot is all about damage increasing reload speed or increasing your damage for a short period of time.

There are a lot of similarities between the PvE and PvP god roll, but there are some differences. Check below to see if your Seventh Seraph Officer Revolver is considered a PvP god roll.

Stability is your key perk since Recoil on the Officer Revolver is high.

PvP perks are mainly centered around maintaining Handling and Stability.

In the last perk slot, you want either of these two perks.

Now that you know if you have a Seventh Seraph Officer Revolver god roll, make sure you check out the SI-2 Sidearm god roll and our Destiny 2 archives for more content.