The One-Eyed Mask is probably one of the most controversial pieces of Exotic armor in Destiny 2. For a long time, this Titan helmet reigned supreme in the Crucible. It allowed Titans to crush their opponents with ease. While it has undergone some changes, it’s still a viable option for those willing to use it. 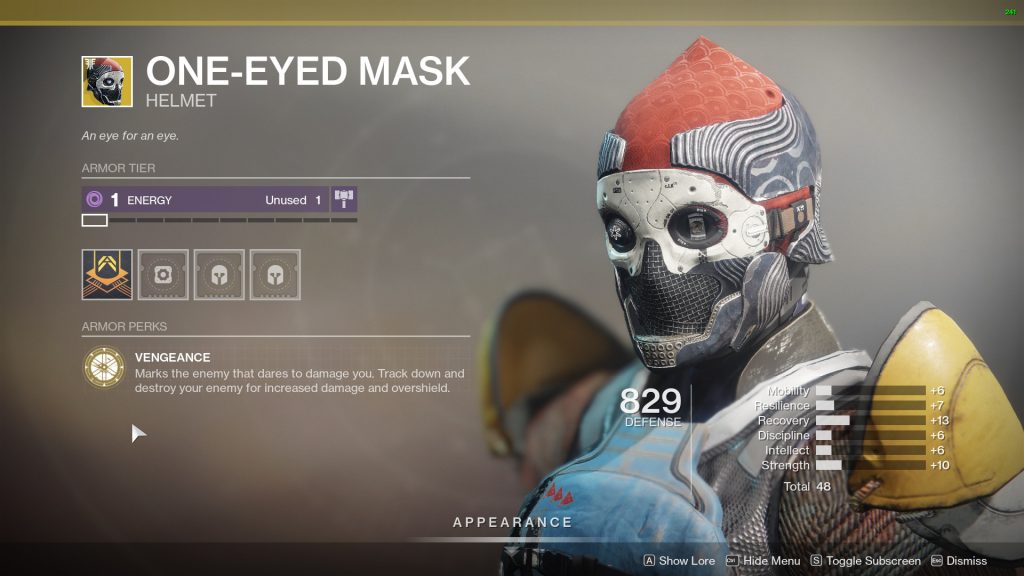 The One-Eyed Mask might not be as powerful as it once was, but it’s still a powerhouse and a great Exotic.

One-Eyed Mask is a new Titan Exotic Helmet that was added to Destiny 2 with the Forsaken content drop in 2018. Since its release, it has dominated the Crucible meta, giving Titans an incredible pool of health from which to draw.

While it has now been nerfed into a different state, it’s still a viable option thanks to its unique perk.

Vengeance is a perk that works well anywhere, but can truly be terrifying for your opponents in Crucible. Whenever another player deals damage to you, they will become marked. If you can track them down and defeat them, you will receive a buff to your damage output and will gain health regeneration.

In previous versions of Destiny 2, One-Eyed Mask also included an overhshield on kill. This was removed at the end of Season of the Undying as it was too powerful. However, this does not leave the helmet a simpering mess.

Best Way to Use One-Eyed Mask

The One-Eyed Mask is definitely useful in the Crucible as well as normal PVE activities. In PVE, being able to immediately gain health regeneration after defeating an enemy that has damaged you is invaluable. It allows a Titan to stay in the fight longer.

There are often dozens of enemies in PVE, all dealing damage to you, this means you’ll constantly be proccing your health regeneration. On top of this, you will be continually dealing more damage.

As for the One-Eyed Mask’s uses in Crucible, it’s still a dominant force. When dealing with a one-versus-two situation, if you can kill one player, you will immediately heal and gain the damage buff, making you an even greater threat for the other opponent.

Even if you only defeat one player, the bonus damage ensures the next player you encounter is in for a world of hurt.

All Titans should definitely consider adding the One-Eyed Mask to their armor line-up. Though it received a nerf, it still provides some appealing bonuses, making you a real threat in Crucible and able to keep on fighting in PVE. Check out the Destiny 2 archive for more Exotic armor tips.