Season of Opulence has begun in Destiny 2 and has brought three new pinnacle weapons with it. This guide will show you how to get Wendigo GL3 Vanguard pinnacle weapon.

How to Get Wendigo GL3 Vanguard Pinnacle Weapon 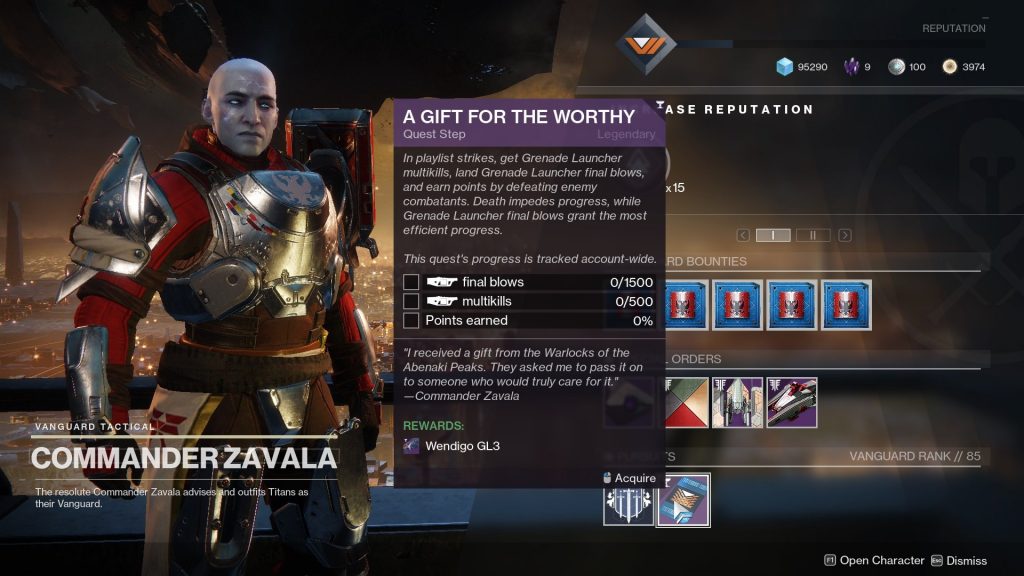 A new pinnacle weapon is available to chase after in Vanguard Strikes in Season of Opulence. In Season of the Drifter, guardians were grinding to get the Oxygen SR3 scout rifle, which is a great PvE weapon.

Zavala has been given a unique weapon, and since he never leaves the Tower, he wants to give it to someone who he knows will value it. Once you load into the Tower, head over to Zavala and pick up the A Gift For The Worthy quest step.

The requirements for completing A Gift For The Worthy are as follows:

Players will need to use Grenade Launchers for final blows and multi-kills in the Vanguard Strike playlist. It’s important to note that death impedes progress and that final blows grant the most progress.

Wendigo GL3 is an adaptive Grenade Launcher with the unique perk Explosive Light. Picking up Orbs of Light increases the next grenade’s blast radius and damage. The Wendigo also comes with the Blinding Grenades magazine option. This allows you to blind enemies temporarily.

The Grenade Launcher you want to use while pursuing the Wendigo is the exotic Fighting Lion, as it fits in the energy weapon slot and uses primary ammo which can be abundant.

Once you’ve earned the Wendigo, you will have a formidable weapon that will be able to blind Fallen Captains and other annoying enemies who try to dodge your every attack. I don’t see the Wendigo used in PvP that often, but it might be just the weapon to use in the Menagerie to help curb the onslaught of enemies.

Make sure you check out our guides on how to get Hush and Revoker next. Destiny 2 is available on PC, PlayStation 4, and Xbox One.