Season of Opulence has begun in Destiny 2 and has brought three new pinnacle weapons with it. This guide will show you how to get Hush Gambit pinnacle weapon.

How To Get Hush Gambit Pinnacle Weapon 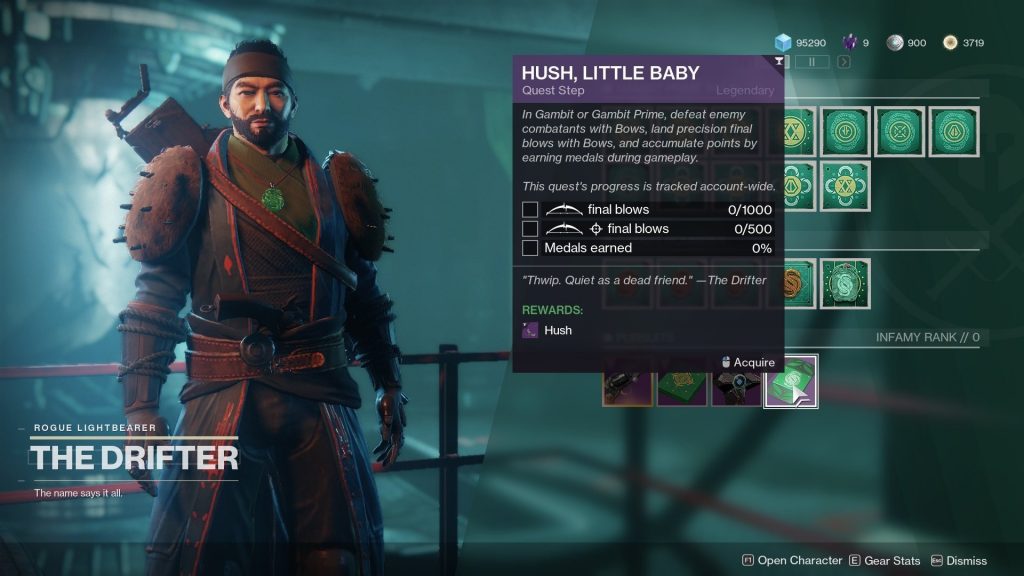 This time around, The Drifter has a weapon that is as deadly as the man himself. The first step is to speak to The Drifter in the Annex and pick up the quest Hush, Little Baby.

The requirements for completing Hush, Little Baby are as follows.

Players will need to use a bow for final and precision final blows to count towards the progress of completion. Medals can be earned in Gambit by doing various tasks while playing. Examples on how to earn medals are banking motes, killing a large number of enemies with a super, taking out multiple guardians when invading, and banking motes when The Drifter says it’s time to summon a Primeval.

Hush is a precision Combat Bow with the unique perk Archer’s Gambit. This perk grants increased draw speed bonus when you get a precision hit while hip firing. If you’re wondering what bow to use while you’re working towards Hush, I recommend Le Monarque or Trinity Ghoul as your go-to bow.

Once Hush has been earned, I feel it will appear quite a bit in Crucible. Bows are one of the weapons in Destiny 2 that are underused despite them being a strong weapon. Find out how to get the Revoker and Wendigo-GL3. Destiny 2 is available for PC, PlayStation 4, Xbox One.

How to Complete Menagerie Encounters in Destiny 2