How to Complete Secret Secrets

The Secret Secrets daily bounty is one of several available bounties that players can purchase from Petra Venj. Players will need to locate Petra Venj in the Dreaming City and spend 1,000 Glimmer to get this mysterious challenge. 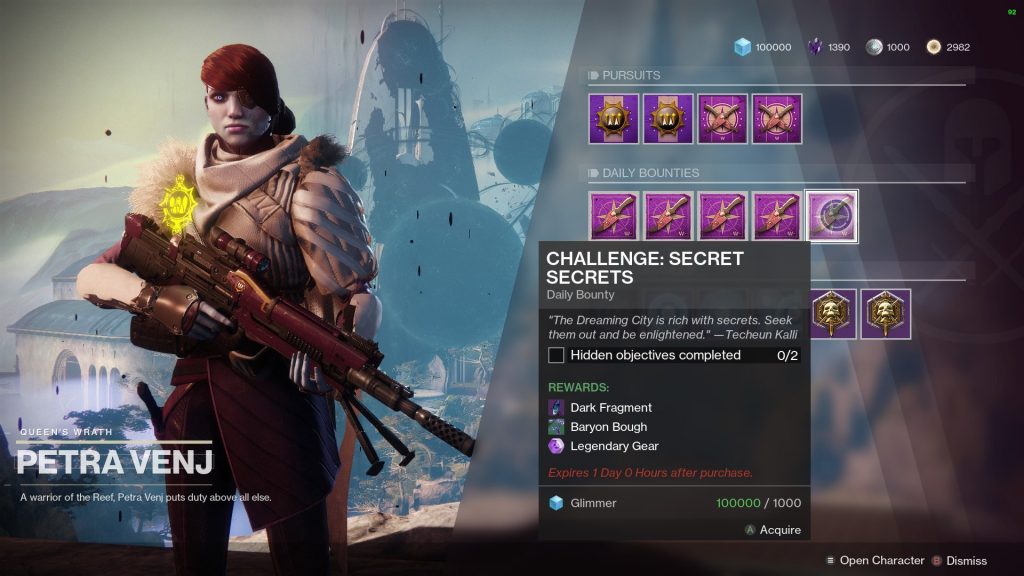 Petra Venj sells the Secret Secrets bounty in the Dreaming City, a bounty that requires hidden objectives be completed.

“The Dreaming City is rich with secrets. Seek them out and be enlightened.” – Techeun Kalli.

While the Ascendant Chests are a guaranteed way of finishing this bounty, players also have the option to give the cats offerings. Hidden around the Dreaming City are 9 blue cat statues. Players can give these statues offerings that “smell faintly of mint”. In exchange, the cats will give a piece of loot from the Dreaming City, either a weapon or piece of armor.

The rewards for completing Challenge: Secret Secrets is a Dark Fragment, Baryon Bough, and a Legendary item. This makes it a rather appealing bounty for players looking to top up their Baryon Bough piles. It’s also worth completing this bounty for the Dark Fragments so that players can buy items from the Ahamkara skulls below the city.

After completing the Secret Secrets bounty, take some time to look over our Destiny 2 guide covering all wishes in the Last Wish raid.