The Season of Opulence has brought the Menagerie into Destiny 2. The Menagerie pits players against a series of encounters until a bar is filled up. Once you fill the bar all the up and defeat the boss, you will deem yourself worthy. This guide will show you how to complete Menagerie encounters in Destiny 2, so you can prove your worth to Emperor Calus.

How to Complete Menagerie Encounters 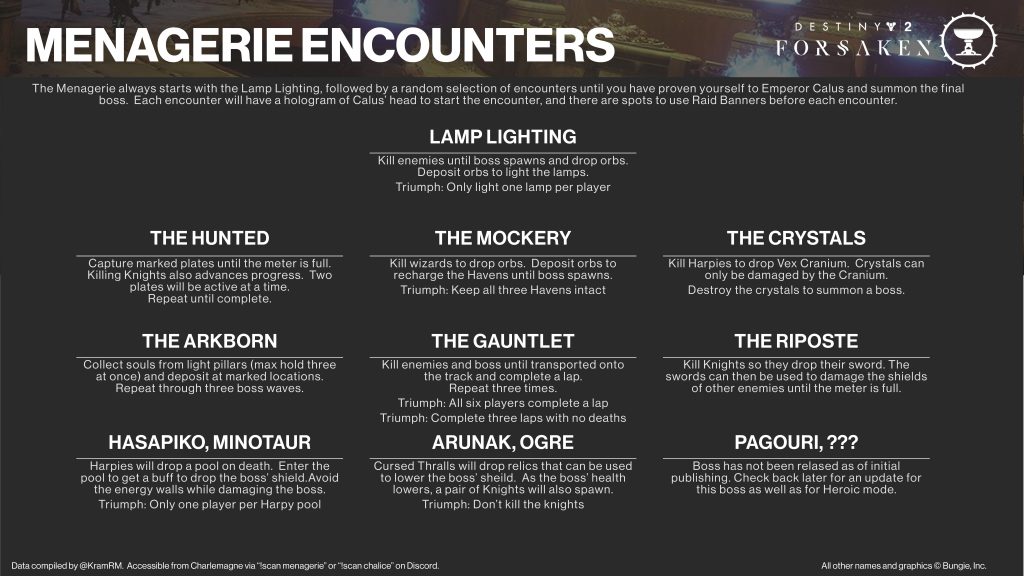 Menagerie encounters always begin with Lamp Lighting and is followed by a random selection of encounters until you have proven your worth to Calus. Each battle will have a golden hologram of Calus’ head to start the encounter. Raid Banners are permitted in the Menagerie, so it’s wise to stock up from Petra in the Dreaming City if you haven’t already.

Each encounter is timed and will be deemed complete if players run out of time or fill the meter to the designated spot. Once the bar is full players will fight a boss. There are three bosses in the Menagerie that rotate with each weekly reset. Reddit user kramrm has created a wonderful graphic summarizing each encounter, and we’ve detailed them below. 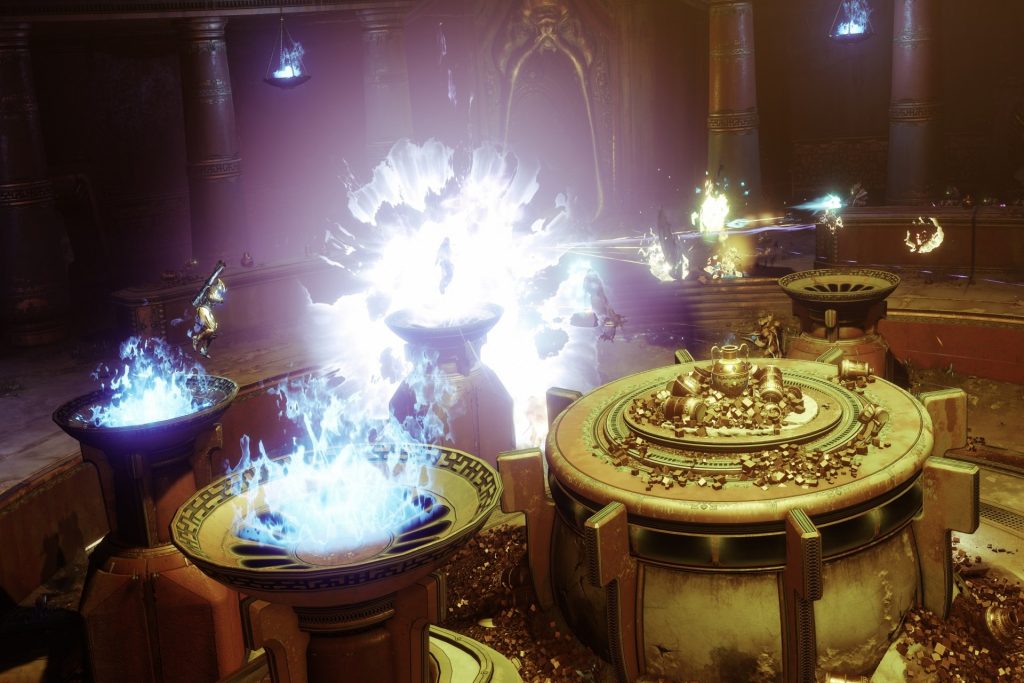 With Lamp Lighting, players kill enemies until a boss spawns and drops orbs. The orbs are to be deposited in the lamps for lighting. Once completed, you will proceed to the next random encounter.

Triumph – Only light one lamp per player.

In the Hunted encounter, players must capture two marked plates until the meter is full. Knights will also spawn during the encounter, and killing them will advance the progress as well.

Players are tasked with collecting souls from light pillars and depositing them at marked locations and is repeated through three waves of bosses. Players can hold up to three souls at once.

In the Mockery, players will need to kill Wizards to drop orbs. These orbs are then deposited into Havens to recharge them. Players will do this until a boss is spawned.

Triumph – Defeat the Ogres with all three havens preserved.

During the Gauntlet, players will kill enemies and a boss until they are transported onto the track and complete a lap. Players will repeat this three times.

Triumphs – Get a perfect score by having all six players complete every lap before time runs out.

During the Crystals, encounter players will need to kill Harpies, so they drop Vex Craniums. Players will use the Vex Craniums to destroy crystals that are scattered throughout the room on the left and right sides. Destroying the crystals will summon a boss.

In Riposte, players are tasked with killing Knights until they drop their sword. Players will need to grab the sword and take down the shield of another Knight, so other players can damage it. The encounter gets harder when Ogres are spawned in, and you must take their shield down.

Hasapiko is a giant Vex Minotaur and will spawn on the front of the stage with shield immunity. Players will need to kill Harpies on the left, right, or middle area of the fight. Once the Harpies are dead, they will drop a pool that players will stand in to bring Hasapiko’s shield down.

When the shield is down, players will deal damage and have to evade walls of energy that will be sent down three different lanes. Avoid the energy walls to keep from dying. This process is repeated until Hasapiko is has been vanquished.

Arunak is a Hive Ogre who will spawn in with shield immunity. Players will need to kill exploding Thrall to make them drop orbs. Once these orbs drop, players will need to pick them up and throw them at Arunak. Throw enough orbs to drop Arunaks shield and deal damage until he is dead. This will take a little bit of time as Arunak is a little tougher than Hasapiko.

Triumph – Defeat Arunak for one triumph. Defeat Arunak without allowing any fireteam member dying during a Heroic Menagerie run for the other triumph.

Nothing is known about Pagouri at this time, but once this boss becomes available, this article will be updated on how to beat it. Once the boss is defeated, players will be able to open the chest and claim their reward from the Chalice.

The Menagerie is definitely one of the brighter spots of Season of Opulence and is a welcome game mode to the mix of Destiny 2. Be sure to check out our Destiny 2 hub for all the Destiny guides and news.

How to Kill Arunak in the Menagerie in Destiny 2