Destiny 2’s Forever Fight challenge is a bounty offered by Hawthorne. This bounty, while offering little direction on how to complete it, at least mentions Techeun Kalli, so you know it involves the Last Wish raid. If you want some extra powerful drops, get a team together and prepare for the Forever Fight!

How to Beat the Forever Fight Challenge

The Forever Fight challenge in Destiny 2 tasks players with fighting Morgeth the Spirekeeper without killing any ogres. That’s right, to complete this challenge, you must keep all the ogres alive. At the start of the fight, two ogres will spawn, and more will be added the longer the fight lasts. 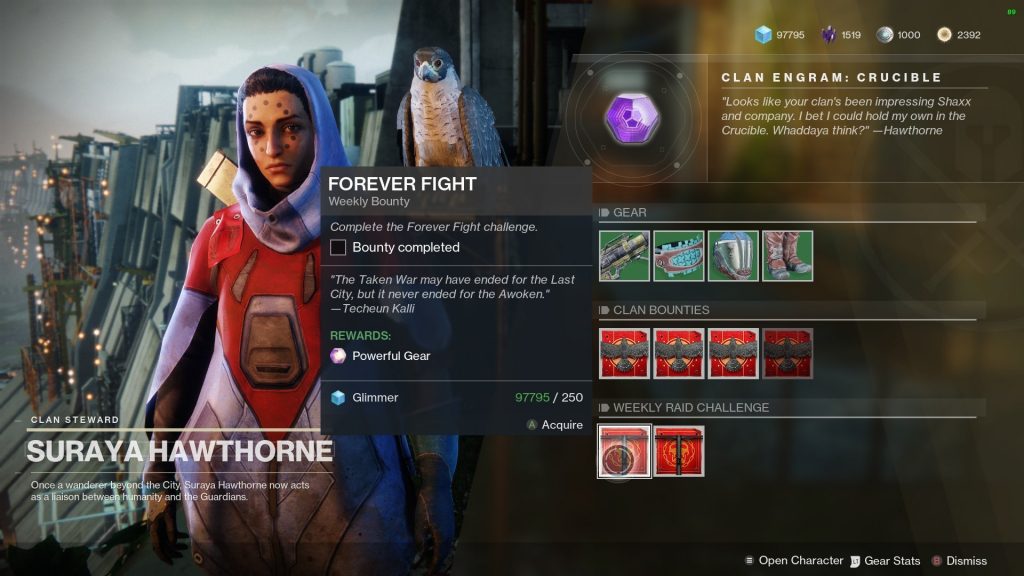 The Forever Fight challenge is a weekly bounty sold by Hawthorne in Destiny 2.

To begin with, this challenge is likely only possible if you already understand the Morgeth fight. In the event you have no idea how to beat Morgeth, this is going to be next to impossible. Furthermore, the challenge will be greater if you are under-levelled. Ensure that you and your teammates are at the recommended Power level or preferably far over it.

The reason you want to be over the recommended Power level is so that you can one-phase Morgeth. One-phasing simply means that when Morgeth becomes vulnerable, he dies during that section.  If Morgeth doesn’t die, another round will begin and more ogres will spawn.

Every ogre that gets added to the field brings more chaos. The reason for this chaos is that an ogre’s main attack, its eye blast, pushes you. With more ogres on the field, the chances of being pushed around and off an edge increases.

Killing Morgeth in a single round means that no more ogres spawn and you can get on your way. As for the two ogres that spawn at the beginning, simply stay down low and use the many pillars to block their attacks.

Once Morgeth dies, and provided no ogres were killed, you will complete the Forever Fight challenge in Destiny 2!