The Eternal Warrior helmet is one of many Titan Exotics in Destiny 2. While it might not have the same immediate utility as something like the Armamentariums, it should still find its way into a Titan’s loadout from time to time. 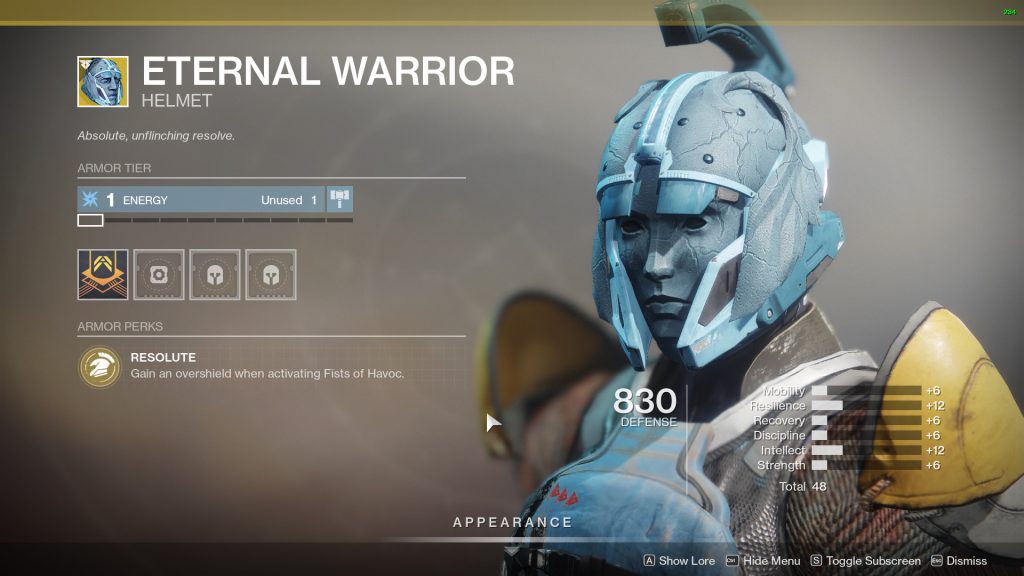 The Eternal Warrior helmet creates an overshield whenever Fists of Havoc is activated.

Originally released in Destiny with the Taken King expansion, the Eternal Warrior found its way to Destiny 2 with the release of Warmind. While its main Exotic perk has changed, it still offers similar power.

The Resolute perk is rather easy to understand. Upon activating Fists of Havoc, an overshield is granted to the player, increasing the health pool while in the Super. The overshield lasts for the entire duration of Fists of Havoc or until the shield is depleted by attacks. The effect cannot be activated twice per Super.

Best Way to Use Eternal Warrior

Unfortunately, the Eternal Warrior Exotic helmet isn’t an overly appealing piece of armor. There are dozens of other better pieces out there which improve the lethality of a Titan. Something like the One-Eyed Mask, despite being nerfed, is leagues ahead of this helm.

In saying this, just because the Eternal Warrior helmet is overshadowed doesn’t mean it’s entirely useless. Players that want or need a little extra bump in health should consider equipping it. When activating a Super, it will keep you alive for longer and may offer the boost in health needed to avoid critical damage.

As for its uses in PVP, it could be useful for those that are worried about getting gunned down before reaching their target. But again, the Titan Striker subclass is outrageously strong and extremely agile, so it’s unlikely players will run into trouble securing kills.

Unless the Eternal Warrior receives some buffs, or unless the meta shifts and Guardians become far more susceptible to damage, it might be best to leave this helmet in Collections.

The Eternal Warrior Titan Exotic helmet in Destiny 2 is useful in some instances but otherwise shouldn’t be anyone’s first pick when it comes to armor. Check out the Guide Stash Destiny 2 archive for even more Exotic armor breakdowns.