This guide will show players how to find the Alton Dynamo treasure, obtained by getting the Imperial Treasure map through the weekly bounty. 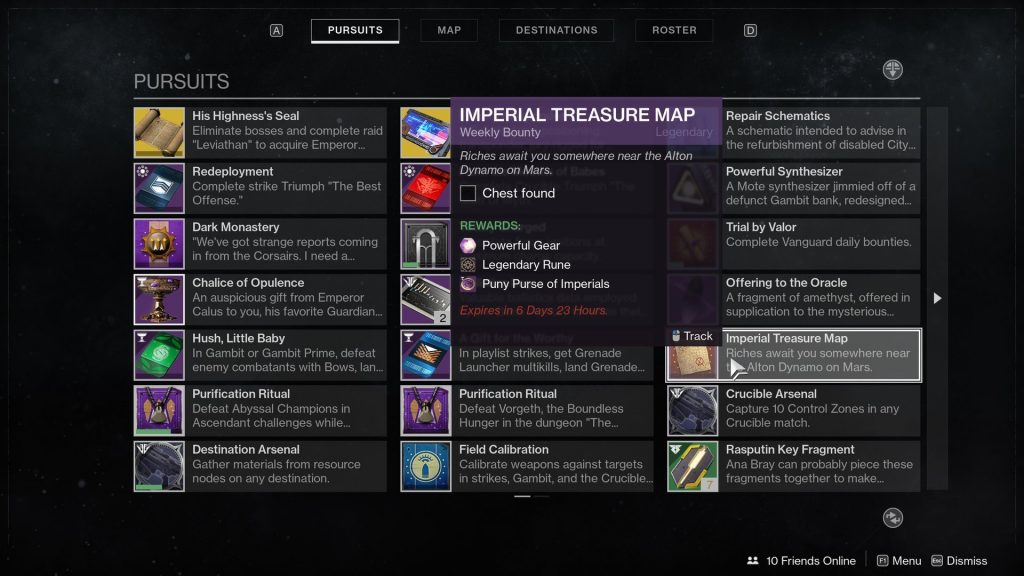 Guardians will want to set a course for Mars and spawn in at the Glacial Drift. Once on the ground, hop on your sparrow and head to the left. Pass through the Dynamo Approach and the ice cave into the Alton Dynamo itself. Guardians should be able to run through the first room, taking the only door available and entering a small corridor. Soon, Guardians will need to choose between going left and right and turning right is the way to go here. Follow the path until a Knight is in front of you. Kill the Knight and any other stragglers, then head into the room and to the back-left corner. This is where the Imperial Treasure for the Alton Dynamo on Mars can be found.

Of course, obtaining Imperial Treasure Maps is accomplished by doing weekly bounties for Werner 99-40. This was specifically was called Gaze Into Death’s Eyes. Most Guardians working their way through the Season of Opulence would be doing this the first week, but I’m sure it will pop up in the future as well.

Right now, we don’t know if the Imperial Treasure Maps are random. What I mean by that is, will doing this same bounty in a few weeks lead to the same location for treasure, or will the location be random? It shouldn’t matter. If you see an Imperial Treasure map pointing you to the Alton Dynamo on Mars, this is where to find it.

Now that you know the location of the Alton Dynamo Imperial Treasure Map, be sure to visit our Destiny 2 hub for all our guides and news related to everyone’s favorite looter shooter from Bungie.

Where is the Menagerie in Destiny 2

What Time Does Season of Opulence Start in Destiny 2?